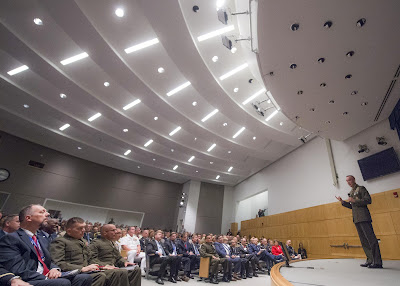 
FORT McNAIR, D.C., Aug. 23, 2016 — National security leaders must be able to confront today’s threats, and they must develop and maintain the personnel, strategies and equipment needed for an ever more uncertain world, the chairman of the Joint Chiefs of Staff told the new class at the National Defense University today.

Marine Corps Gen. Joe Dunford also shared with the members of the class of 2017 his thoughts on the strategic landscape, and the implications to the joint force.

Dunford agrees with assessments that the world is in the most uncertain time since the end of World War II. Still, the U.S. military “is recruiting and retaining quality people,” the chairman said.

“Across the board,” he added, “they are focused. They are committed. They are high quality.”

There are signs of wear in some military specialties and Dunford cited a pilot shortage and the near constant deployments of special operators and other small, but crucial specialties, specifically. But, he noted the closer to a combat environment, the higher the morale.

“In the environment we are in today, with the complexity and volatility and variety of challenges we have, how do we assess risk?” he asked. “How do we assess the capabilities or capacities that must exist in the joint force? A part of this is also how to prepare for the unexpected.”

The threat baseline, he said, is four-plus-one: Russia, China, Iran, North Korea and violent extremism. Four are nation states that can cause varying degrees of concern. The fifth threat, terrorism, can flare up in any part of the world.

“We use those four state actors and one nonstate actor … to get an appreciation for where is the force relative to where it needs to be,” Dunford said.

He addressed each of the threats starting with the campaign against the core of the Islamic State of Iraq and the Levant in Iraq and Syria. The military campaign against core ISIL is going well, he said. Iraqi security forces have proved in Fallujah and Ramadi that they can take on ISIL and win. They have set the stage for the battle against the terror group in Mosul -- Iraq’s second-largest city and the largest city anywhere under ISIL control. 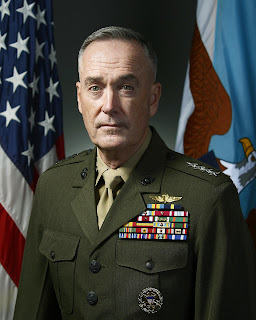 Now, he said, “it is no longer the military campaign that is going to be the determining factor in the success in Iraq. The interactions of governments in Iraq, the role of Shia militia forces, the relationship of the Peshmerga in the north with the Shia and government -- all those things have to be sorted out.”

Meanwhile, the United States is supporting 14,000 Arab fighters and upwards of 30,000 Kurds during the counter-ISIL campaign in Syria, said Dunford, who noted there’s been much ground retaken there from ISIL.

ISIL is not limited to Iraq and Syria and the United States is helping government forces in Libya strike at ISIL in Sirte, Dunford said. The U.S. needs to eliminate the group from the region for ISIL in Libya could be the headquarters for the group throughout Africa and for attacks into Europe, he said.

Dunford said the counter-ISIL campaign in Libya is making progress. “The trajectory that ISIL was on in Libya in January and February was concerning to me, but it is less so today,” the chairman said.

ISIL is also in Afghanistan, West Africa and is trying to gain adherents in Southeast Asia. The United States will confront the group wherever it goes, Dunford said.

The U.S. competitive advantage in many of these areas is getting smaller, the chairman said.

Dunford said he’s concerned about Russia’s behavior, including its annexation of Crimea, its actions in Eastern Ukraine, it threats to Georgia and Moldova, and its aid to Syria.

Russia is engaging in these actions in an attempt, Dunford said, to “undermine the most successful alliance in history -- the NATO alliance.”

He added: “From a U.S. perspective, I would tell you I believe our center of gravity as a nation, through a security lens, is the network of alliances. Russia is trying to erode that.”
Russia and China are separately concentrating on anti-access, area denial strategies, but for similar ends, the chairman said.

The Question of China

China is a bit more opaque, Dunford said. China has invested significant sums in building up its military, including its nuclear enterprise. Its actions in the South China Sea are cause for concern to the United States, the chairman said.

Meanwhile, Iran is trying to spread its influence across the Middle East, he said, and must be carefully monitored. And, the chairman said, North Korea is still building nuclear capabilities and intercontinental missiles and is the most unpredictable nation on the list.
All these risk assessments have implications for the joint force. The first, Dunford said, is the United States must have balanced capabilities. “In other words, we have to have capabilities that range from the nuclear down to conventional and special operations capabilities,” he said. “We as a nation with the challenges out there cannot afford not to have a robust capability.”

Another implication is the United States has to do better at integrating all aspects of the government into strategy and integrating allies and partners into plans, the chairman said.
Finally, the chairman believes any disagreement has the potential to grow to a transregional, multi-domain conflict.

He cited the example of North Korea. In the 1990s, it was possible that if the armistice broke down, the conflict could be limited to the Korean Peninsula. With ballistic missiles, the cyber threat and conventional attacks, any conflict with North Korea would soon escalate to include the rest of U.S. Pacific Command, U.S. Northern Command, U.S. Strategic Command and U.S. Cyber Command.

This calls for a much greater degree of strategic integration in the future, Dunford said. The decision-making processes need to be streamlined, and leaders need a common operational picture. All this requires a strategic framework to build the plans for global operations.
Posted by Paul Davis at 1:59 AM