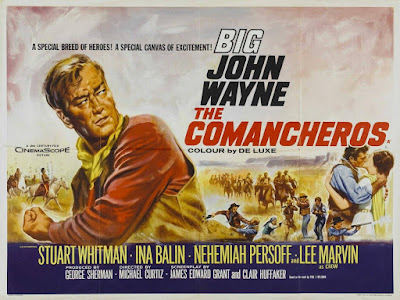 A few years back I watched John Wayne's The Comancheros for perhaps the fourth time and I recall thinking, and later mentioned to a friend, that the 1961 Western film was in some ways a James Bond-type thriller.

Nehemiah Persoff was an early-day Bond-type villain with a SPECTRE-like criminal organization. The Duke is a Texas Ranger who goes undercover and infiltrates Persoff's lair, much like Bond does in the 007 films (and the earlier Ian Fleming novels).

There is also a dramatic Bond-like card game with John Wayne and bad guy Lee Marvin. Marvin, in a brief but powerful role, is at his evil best. This bad guy may be even more rotten than Marvin's Liberty Valance outlaw character in The Man Who Shot Liberty Valance.

There are other similarities between Bond thrillers and The Comancheros, as The Spy Commander website points out.

You can read the post via the below link:

Note: In this film John Wayne shows his acting chops when he assumes the identity of a gunrunner he meets briefly in jail. You can clearly see the contrast between Wayne's Texas Ranger character and his assumed role as an outlaw gunrunner. Good movie.
Posted by Paul Davis at 6:28 PM