Trigger's Lucky Berlin Escape: A Look Back at 50 Years Of Ian Fleming's 'The Living Daylights' 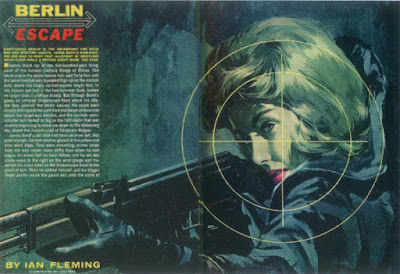 This past June saw the 50th anniversary of the publication of Ian Fleming's last James Bond book,  Octopussy and The Living Daylights, published two years after his death.

To mark the anniversary, Tom Cull at www.ianfleming.com offered a piece on Fleming's The Living Daylights.

The Living Daylights had a few working titles including ‘Trigger Finger’, but first appeared in The Sunday Times colour supplement in 1962, under the title ‘Berlin Escape’. Written in two weeks at the end of September, before On Her Majesty’s Secret Service and after the disappointing reception of The Spy Who Loved Me, this short story was a serious, back-to-basics effort, which took Bond to his secret service roots. Not for nothing did Bond own a Double-0 status and this was Fleming’s way of proving it: by the no-nonsense briefing from M, target practice at the Century Range in Bisley, then off to Berlin to assassinate a deadly KGB sniper codenamed ‘Trigger.’

It is a taut, tough and brutally realistic window into a fraught Cold War Berlin, which by 1961 was still emerging from economic and political divisions from a war that destroyed 50% of the city and left 8 million dead. Two very different political ideologies were pitted against each other between the Soviet socialist sector in the East of Berlin and the Allied sector in the West. The Soviets dismantled much of the industries and transport that existed, which encouraged a thriving black market economy and culminated in the ultimate segregation – the Berlin Wall. When Fleming visited Berlin for part of his Thrilling Cities volume, he described the Eastern Sector where ‘death and chaos and, worst of all, present drabness hang most heavily in the air.’

http://www.ianfleming.com/triggers-lucky-berlin-escape-50-years-of-the-living-daylights/
Posted by Paul Davis at 9:54 AM