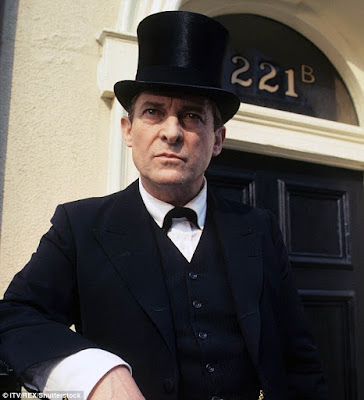 For the older generations who grew up with actor Basil Rathbone portraying Sir Arthur Conan Doyle's iconic detective character, he is the one and only Sherlock Holmes. I suppose I understand that sentiment, as I feel that way about Sean Connery and Ian Fleming's character James Bond.

But I and many other TV viewers thought the late Jeremy Brett was the definitive Sherlock Holmes.

But according to Chris Hasting at the British newspaper the Daily Mail, Jeremy Brett was not honored with an English Heritage blue plaque on the house where he once lived simply because he was a white actor.

You can read the Daily Mail piece via the below link:

You can watch the episodes of The Adventures of Sherlock Holmes with Jeremy Brett via the below link:

https://www.youtube.com/watch?v=einpc7psJB0&list=PLzovi87vDfzJGGoYv7u4FDQpoYduhoMf_
Posted by Paul Davis at 7:13 AM