A Novel Look At Stalin: My Washington Times 'On Crime' Column On Robert Littell and 'Comrade Koba' 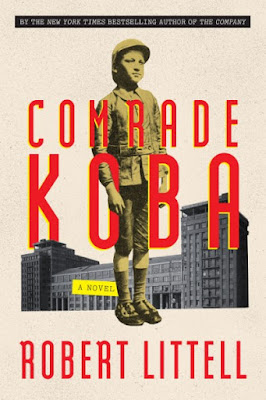 The Washington Times ran my On Crime column on Robert Littell and Comrade Koba, his novel about about one of the most evil men in history, Stalin.

In Robert Littell’s novel “Comrade Koba,” a young boy named Leon, who along with other parentless children, is hiding in the labyrinth of secret rooms of a large house where many Soviet officials, like his late father, lived and worked.

While exploring the large building the boy encounters an elderly man who calls himself Koba. The man and the child begin a dialogue about Soviet life and history over a series of visits to the man’s apartment.

I reached out to Robert Littell and asked him what inspired him to write “Comrade Koba.”

“I have long been fascinated by Iosif Stalin, surely one of the most brutal — and most riveting — figures of the twentieth century,” Robert Littell replied. “I’ve already nibbled at the edges of this story in my novel ‘The Stalin Epigram,’ in which the great Russian poet Osip Mandelstam imagines two meetings with the Soviet dictator. What I was getting at in ‘Comrade Koba,’ which is half fable, half black comedy, was a portrait of the unrelenting evil of the man, and an exploration of what might have happened to the innocence that even dictators begin life with.

“I decided early on that the best way to portray Stalin was to see him through the innocent eyes of a precocious ten-and-a-half-year-old boy who didn’t recognize the old man he was having confabulations with, as the 74-year-old Stalin didn’t look anything like his retouched photographs on posters or in newspapers. Stalin, for his part, is intrigued by his conversations with the naive kid. The boy tells him, when they first meet, that as he doesn’t know who he is, he’s not afraid of him. Stalin replies: ‘I don’t often get to talk to people who aren’t afraid of me.’ On that note the novel is launched.”

Mr. Littell said that the resentments, prejudices and fears that Stalin harbors, along with his paranoia and visceral anti-Semitism, are historically accurate, but the actual story of the young boy stumbling on an old man who invites him up to his well-guarded apartment is invented.

“Leon is a precocious, clever and courageous kid and the soul of innocence, which provides the motor for the novel as his innocence stands in stark contrast to the evil of the old man he converses with,” Mr. Littell said. “The boy’s father was a nuclear physicist who died in a radiation accident. His mother is one of the Kremlin doctors who were arrested, in the months before Stalin died in 1953, as part of his campaign against Russian Jews. With the arrest of his mother, Leon winds up hiding in one of the secret rooms in the House on the Embankment — surviving along with other children in the same boat, waiting, hoping against hope that his mother, whose arrest he witnessed, will be released from prison.

Note: You can click on the above to enlarge.