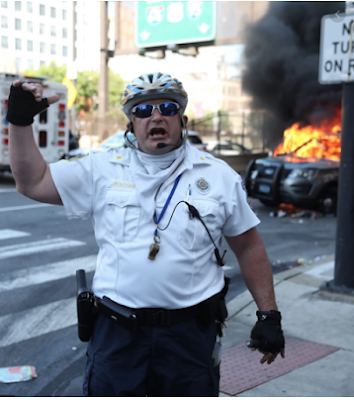 District Attorney Larry Krasner loves to indict cops, even when there's no evidence to back it up.

Today, Krasner's reckless and irresponsible behavior blew up in his face. Former Staff Inspector Joseph Bologna walked out of court a free man after a judge threw out all the charges Krasner filed against him for lack of evidence.

At a preliminary hearing in Municipal Court, the dismissed charges against Bologna included reckless endangerment, possession of an instrument of crime, and felony aggravated assault.

Bologna was accused of striking a protester, Evan Gorski, in the head with his metal baton, his department-issued instrument of crime, which, according to the D.A., inflicted wounds on Gorski that required 10 staples and 10 sutures.


But when it comes to indicting cops, D.A. Krasner sees only want he wants to see. In video of the June 1st incident, which was broken down frame by frame in the courtroom, no such blow from Bologna's baton was seen striking Gorski's head. Neither was any blood visible, nor any gaping head wound.

On the witness stand, Gorski, a Temple University engineering student, claimed he was exercising his First Amendment rights at a George Floyd protest. But Gorski admitted that he was also interfering with Bologna as the officer was trying to arrest a young man wearing a pink bandana in the video.


Gorski also testified that he grabbed Bologna's baton. In the video, Gorski was seen throwing the baton into a crowd while Gorski was on the ground, being subdued by the cops.


No baton blow to the head, no visible injuries; case dismissed.


Gorski had orignally been charged with assaulting a police officer. But in the theater of the absurd that is Larry Krasner's D.A.'s office, the charge against Gorski was dismissed by the D.A.


But in court today, when none of the 0charges the D.A. filed against Bologna stuck, it was a humiliating defeat for Krasner. The D.A. now has 30 days to decide whether he will re-file charges against Bologna.


Logic would say to quit while you're behind, but when it comes to indicting cops, Krasner doesn't follow logic.


Predictably, Krasner, who has stonewalled Big Trial for the past 18 months, told a couple of reporters at The Philadelphia Inquirer, Krasner's favorite local news outlet, that he intended to refile the charges against Bologna.


Brilliant move, Larry. Retry the same sad case with the same lack of evidence, but expect a different result. Literally, the definition of insanity. We anxiously look forward to your next humiliating defeat.