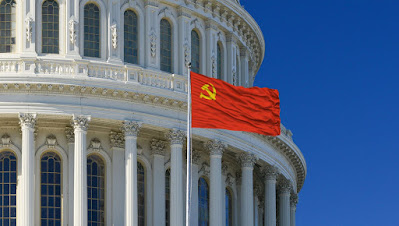 The Babylon Bee offers their satirical take on the Democrats taking control of the Senate.

WASHINGTON D.C.—“Freedom is over!” Biden announced to the press as the red flag of the Chinese Communist Party flew over the Capitol, marking that the Democrats now have control of the presidency, Senate, and House.

"The Bill of Rights is gone," Biden continued. "Free markets will end. Now that we have a slim majority in the House and Senate, liberty shall be destroyed! ...As long as we can get Joe Manchin to agree."

Democratic Representative Alexandria Ocasio-Cortez has submitted a number of designs for new gulags she drew in crayon, which will be for people who don’t announce their pronouns, and the designs are expected to pass the new Congress easily.

Some Democrats are concerned that the Supreme Court could stop their plans since the conservatives there interpret the Constitution as not allowing the government to destroy all freedom, but there are plans to pack the court with five hundred members of Antifa.

President Donald Trump assures everyone, though, that he actually won the presidency and Republicans did win the House and Senate and he’ll get that all cleared up in the next week or so.