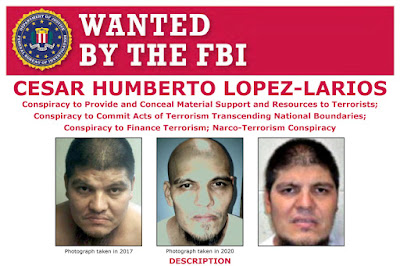 An indictment was unsealed in Central Islip, New York charging 14 of the world’s highest-ranking MS-13 leaders who are known today as the Ranfla Nacional, which operated as the Organization’s Board of Directors, and directed MS-13’s violence and criminal activity around the world for almost two decades.

Specifically, the indictment charges the defendants with conspiracy to provide and conceal material support to terrorists, conspiracy to commit acts of terrorism transcending national boundaries, conspiracy to finance terrorism and narco-terrorism conspiracy in connection with the defendants’ leadership of the transnational criminal organization over the past two decades from El Salvador, the United States, Mexico and elsewhere.

Members of the public with information concerning their whereabouts are strongly encouraged to contact the Federal Bureau of Investigation’s (FBI) toll-free MS-13 tip line, 1-866-STP-MS13 (1-866-787-6713), or U.S. Immigration and Customs Enforcement’s Homeland Security Investigations (HSI) at (866) 347-2423 or https://www.ice.gov/webform/ice-tip-form.  Together, FBI and HSI have offered $20,000 in rewards for information leading to the arrest and conviction of each of the three fugitives.  Henriquez and 10 other defendants are in custody in El Salvador.  The United States will explore options for their extradition to the United States with the Government of El Salvador.

Acting Attorney General Rosen said, “The indictment announced today is the highest-reaching and most sweeping indictment targeting MS-13 and its command and control structure in U.S. history.  When Attorney General Barr announced the creation of JTFV in August 2019, he envisioned a whole-of-government approach that would combine proven prosecution tools from the past with innovative strategies designed specifically to eliminate MS-13 leadership’s ability to operate the gang and direct its terrorist activity.  This indictment reflects an important step toward achieving that goal.  By working side-by-side with our U.S. law enforcement partners and with our partners in El Salvador, we have charged MS-13’s highest-ranking leaders with operating a transnational criminal organization that utilizes terror to impose their will on neighborhoods, businesses and innocent civilians across the United States and Central America.”

“MS-13 is responsible for a wave of death and violence that has terrorized communities, leaving neighborhoods on Long Island and throughout the Eastern District of New York awash in bloodshed,” said Acting U.S. Attorney Seth D. DuCharme.  “Even when incarcerated, the Ranfla Nacional continued to direct MS-13’s global operations, recruit new members, including children, into MS-13, and orchestrate murder and mayhem around the world.  Today’s ground-breaking indictment seeks to demolish MS-13 by targeting its command and control structure and holding MS-13’s Board of Directors accountable for their terroristic actions.”

“The FBI is committed to combatting all forms of terrorism that threaten the American people as well as our international partners,” said FBI Director Christopher Wray. “In collaboration with our federal, state, local and international partners, we took aggressive steps to target and pursue some of the highest levels of leadership of MS-13. This operation is a clear signal to others who engage in this type of transnational criminal activity: the FBI will work tirelessly to bring them to justice wherever they are based.”

“For over a decade, HSI has remained steadfast in our resolve to dismantle transnational gangs like MS-13,” said HSI Executive Associate Director Benner.  “As one of the most violent and dangerous criminal enterprises, MS-13 and Ranfla Nacional were directly responsible for unthinkable violence and criminal activity in communities across the United States and throughout Central America.  As a result of the hard work and substantial resources dedicated to Joint Task Force Vulcan by our domestic and international law enforcement partners, this indictment will have a lasting disruptive effect on the future global illicit activities of this transnational criminal organization.”

As alleged in the indictment, the Ranfla Nacional comprises the highest level of leadership of MS-13.  In approximately 2002, the defendants and other MS-13 leaders began establishing a highly organized, hierarchical command and control structure as a means to effectuate their decisions and enforce their orders, even while in prison.

They directed acts of violence and murder in El Salvador, the United States, and elsewhere, established military-style training camps for its members and obtained military weapons such as rifles, handguns, grenades, improvised explosive devices (IED) and rocket launchers.  As leaders of MS-13, the defendants controlled swaths of territory and engaged in public relations efforts on behalf of the transnational criminal organization.  Further, the defendants used MS-13’s large membership in the United States to engage in criminal activities, such as drug trafficking and extortion to raise money to support MS-13’s terrorist activities in El Salvador and elsewhere, and directed members in the United States to commit acts of violence, including murders, to further its goals.

As further alleged in the indictment, a central theme of the rules implemented by the Ranfla Nacional was the requirement of loyalty to MS-13, or to the “barrio.”  The requirement for loyalty was central to all aspects of life for MS-13 members.  Members who disobeyed the rules, showed disloyalty to the gang or to its leaders, cooperated with law enforcement, or disrespected other members were subject to severe punishment, including death.  The rules put in place by the Ranfla Nacional allowed the gang to flourish in parts of the United States, including within the EDNY where, under the defendants’ command, MS-13 has committed numerous acts of violence—including murders, attempted murders, assaults, kidnappings, drug trafficking, extortion of individuals and businesses, obstructed justice and sent dues and the proceeds of criminal activity by wire transfer to MS-13 leaders in El Salvador.

As part of this agreement, the Ranfla Nacional directed MS-13 to reduce homicides in El Salvador in exchange for improved prison conditions, benefits and cash payments.  In 2015, when this agreement collapsed, the Ranfla Nacional blamed the United States, believing that the U.S. government pressured the government of El Salvador to end the “truce” as a condition of receiving funds from the United States.  Thereafter, in early 2016, the Ranfla Nacional began planning for a major campaign of coordinated violence in El Salvador in retaliation for the harsher measures imposed on its members after the end of the “truce.”  As alleged in the indictment, the defendants ordered all cliques in El Salvador to create a specialized unit of MS-13 members to target police officers, military members, and government officials in El Salvador.  These members underwent military training at MS-13 military training camps in El Salvador.  The defendants also ordered all cliques, including those in the United States and in the EDNY, to provide profits from their MS-13-related criminal activity to be used to purchase weapons for the planned attacks on police in El Salvador.  In total, the defendants collected over $600,000 U.S. dollars for this fund which was used to purchase weapons, including M-16s and M-60 machine guns, grenades, IEDs, and rocket launchers.  Furthermore, the defendants ordered increased violence, including murders, in the EDNY and other parts of the United States, which saw a dramatic increase in MS-13 violence in 2016 and 2017.

Finally, as alleged in the indictment, the Ranfla Nacional directed the expansion of MS-13 activities around the world, most significantly into Mexico, where several high-ranking leaders were sent to organize operations there.  In Mexico, MS-13 leaders made connections to obtain narcotics and firearms, conducted business with Mexican drug cartels such as the Zetas, Gulf Cartel, Cártel de Jalisco Nueva Generación (CJNG) and Sinaloa Cartel, and engaged in human trafficking and smuggling.

In August 2019, Attorney General William P. Barr created JTFV to carry out the recommendations of the MS-13 Subcommittee formed under the Attorney General’s Transnational Organized Crime Task Force (TOC Task Force).  The Attorney General’s TOC Task Force resulted from President Donald J. Trump’s February 2017 Executive Order directing the Departments of Justice, State, and Homeland Security, and the Office of the Director of National Intelligence to coordinate a whole-of-government approach to dismantle transnational criminal organizations, such as MS-13, and increase the safety of the American people.

Since its creation, JTFV has successfully implemented a whole-of-government approach to combatting MS-13, including increasing coordination and collaboration with foreign law enforcement partners, including El Salvador, Mexico, Honduras and Guatemala; designating priority MS-13 programs, cliques and leaders, who have the most impact on the United States, for targeted prosecutions; and coordinating significant MS-13 indictments in U.S. Attorney’s Offices across the country, including the first use of national security charges against MS-13 leaders.

The charges announced today are allegations, and the defendants are presumed innocent unless and until proven guilty beyond a reasonable doubt in a court of law.  If convicted, the defendants face a maximum sentence of life in prison.