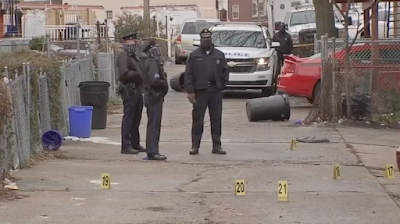 Ralph Cipriano at BigTrial.net offers a piece on the 2020 homicide rate in Philadelphia.

How many people were murdered in Philadelphia during 2020?

In the last few days, that number appeared to be a moving target. On Friday, New Year's Day, the official tally for last year's murders that was posted on the police department's crime stats website was 498.

The city's explanation for today's downgrade from 502 murders last year to 499 murders: it was a statistical error made by a web designer, an explanation that left some cops shaking their heads, and muttering about a possible official coverup.

"The correct homicide totals for 2020 is 499. When the web developer was updating the website, he did not separate 2020 and 2021. The homicides that occurred at the beginning of the year were inadvertently counted into the 2020 totals. The web developer corrected the issue and the website now reflects the accurate totals."

According to Corporal Reilly, so far in 2021, the city's had four additional murders.


The city's all-time record for murders set back in 1990 appears to be another moving target. A few years ago, when the Inquirer and Daily News published a "Data Hub" that featured Philadelphia Police Department crime stats from 1988 to 2017, the newspapers cited the official homicide rate for 1990 as 497 murders.

That same body count, 497, was cited by Wikipedia, among other websites. But when the Inquirer ran a story today about the 2020 body count, that 1990 murder rate jumped to 500.

Carlos Vega, a former career homicide prosecutor who's running for the Democratic nomination for district attorney, said today that the current D.A., Larry Krasner, is responsible for the high murder rate, because "Larry Krasner has legalized drugs in Philadelphia." At the same time he's not prosecuting gun crimes, Vega said.

"There's a direct correlation between not prosecuting gun crimes" and a record number of shootings on the streets of Philadelphia last year, Vega said. He quoted Police Commissioner Danielle Outlaw who testified to the City Council that the prosecution of gun crimes under D.A. Larry Krasner's office was down nearly 85%.

"The police are doing their job and Larry Krasner is deciding not to prosecute," Vega said, adding that some drug dealers are arrested multiple times for carrying guns, with few consequences.