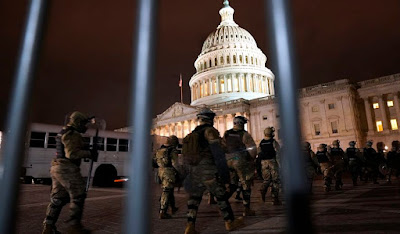 Dave Boyer and Gabriella Muñoz at the Washington Times offers a piece on the disgraceful rioters on Capital Hill.

Lawmakers and reporters are still sheltering in place in undisclosed locations, as a 12-hour curfew in the nation’s capital and surrounding neighborhoods went into effect at 6 pm.

Large groups of demonstrators are still in the area, though they’ve been cleared from the building itself, according to multiple reporters inside the building. Audio announcing the curfew could be heard playing throughout the Capitol.

The crowds assaulted police and broke in through windows, forcing lockdowns and evacuations of Congress as they halted lawmakers temporarily from certifying the Electoral College results for President-elect Joseph R. Biden.

Lawmakers are considering gaveling back into session and carrying on with the certification process. They had just begun debate on the first challenge — an objection to votes from Arizona — when the chaos began.

“We’re going to finish tonight. Everyone is committed to staying whatever it takes to get our job done,” Sen. Joe Manchin, West Virginia, said. “I think we’re going to go back to the Capitol — they’re just clearing out the chamber now, they’re clearing out the House, so we can go back and forth and do our work.”

The demonstrators, many waving U.S. and Trump flags, breached security perimeters at the Capitol and flooded toward the House and Senate chambers shortly before 2 p.m. One protester could be seen celebrating in the chair of the Senate’s presiding officer, while police in the House chamber barricaded the doors with furniture and pointed guns at demonstrators who smashed windows in an effort to get inside.

A civilian woman died after being shot by law enforcement, sources confirmed to The Washington Times. Little is known about the incident, which is still under investigation by Washington Metropolitan Police.