Kiss Of Death From The KGB: Lipstick Gun, Umbrella With A Poison Syringe And A Fake Tooth For Storing Cyanide Among The Soviet Spy Relics Set To Sell For Up To $365,000 At Auction After A KGB Espionage Museum In New York Was Forced To Close Due To Covid 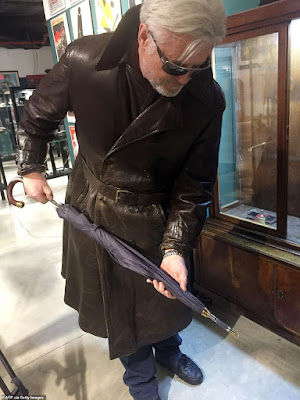 Sam Baker at the Daily Mail offers a piece on the auction of KGB lethal spy gadgets.

An incredible collection of Cold War relics, including a number of Soviet disguised weapons, is set to be sold at auction - and is expected to sell for £365,000.

Historian and collector Julius Urbaitis, 57, who worked as the consultant on the HBO series Chernobyl, amassed the remarkable group of gadgets over a 30-year period, procuring almost 400 items in that time.

The items were put on display at a KGB Espionage Museum in New York back in 2019, where Urbaitis was the curator, but the coronavirus pandemic has meant the gallery has had to close down and sell off the collection.

Mr. Urbaitis filled the museum with items from his personal collection, like a listening device used by Adolf Hitler, and artifacts and replicas acquired specifically for the museum and enlisted his daughter, Agne Urbaityte, 30, to serve as co-curator.

One of the most sought-after items in the collection is a KGB spy umbrella which conceals a poison syringe and has been valued at £3,700.

A spring-loaded syringe is hidden within the shaft fires the needle tip from the end of the umbrella when a trigger near the handle is activated.

The umbrella is a reproduction of the one thought to have been deployed to assassinate the Bulgarian defector Georgi Markov in London in 1978 - in that incident, a pellet containing ricin was fired into his leg.

Another intriguing item in the collection is a 'kiss of death' lipstick gun used by female operatives which has been valued at an estimated £1,500.

You can read the rest of the piece and view the photos via the below link: