Babylon Bee: Google Reports Sudden Spike In Searches For 'Can You Take Back Your Vote For President' Among Biden Voters 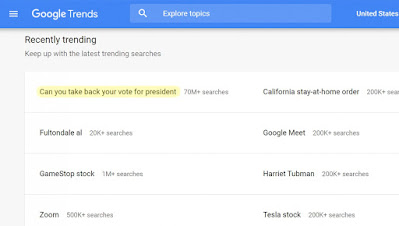 U.S.—Google has reported a sudden spike in searches for the term "can you take back your vote for president" among Biden voters.

There were some 70 million searches for the term during Biden's first week in office, sources at Google confirmed Tuesday.

"We, uh, think this must be because people are so happy to have voted for him, that they, uh, want to... take back their vote and then cast it again?" said a Google spokesperson. "Because he's clearly doing such a fantastic job. It can't possibly be because people have regret for voting for someone who turned out to be pro-war, had no COVID-19 plan like he promised, and walked back his promises on the $15 minimum wage."

"I mean, the guy was in office for 50 years, so it's hard to say exactly what his positions are and what he might do when he's in office."

At publishing time, Google had manually scrubbed the search trend from its servers and replaced it with "can you vote for Joe Biden a second time because he's so amazing."

You can read more humor pieces like this via the below link: