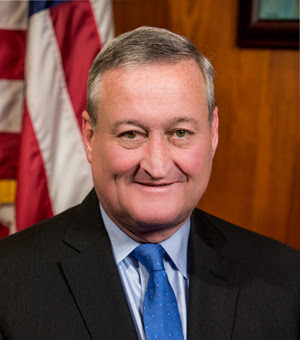 I interviewed Philadelphia Mayor Jim Kenney some years ago when he was a city councilman and I was a columnist for a South Philly weekly newspaper. I agree with former Philadelphia Daily News columnist Stu Bykofsky - he was a different man then.

Stu Bykofsky offers his take on the “sour-faced” Philly mayor on his website:

This is the kind of person he is.

When running for reelection in 2019, Mayor Jim Kenney refused to debate Republican candidate Billy Ciangalini, basically sticking his thumb in the eye of critics who said he owed the concept of democracy a little show. In a city that hasn’t elected a Republican mayor in more than 70 years, he wasn’t in much danger from Ciangalini, who ran a barely there campaign. Kenney showed his contempt for political process.

Please, God, spare me from this job.

And now rumors circulate that he may be interested in running for governor or U.S. Senate. I wonder a) why, and b) how can he possibly win?

I think Kenney ran for a second term because he didn’t have anything better to do. He ran for mayor in the first place on an impulse, when someone else dropped out, and, like a dog chasing a car, didn’t know what to do when he caught it.

I don’t think highly of him as a politician now — I was a big fan when he was a Councilman concerned with quality of life issues. I also don’t think much of him as a man — having turned his back on his wife, Maureen, his mentor, former State Sen. Vince Fumo, even members of the Jokers Mummers club, where he spent a couple of happy decades before he went to progressive reeducation camp, and learned his former friends were low-life racists.

He’s become a different man today, and seemingly not happy with what he has become.

Don’t take my word for it. Listen to fellow progressive Larry Platt, editor of the Public Citizen:

“Even before a once-in-a-lifetime plague and a racial conflagration rocked our city, Philadelphia had the dubious distinction of having America’s most sour-faced mayor,” Platt wrote.