Babylon Bee: Trump Sneaks Back On Twitter By Disguising Self As PR Rep For Chinese Communist Party 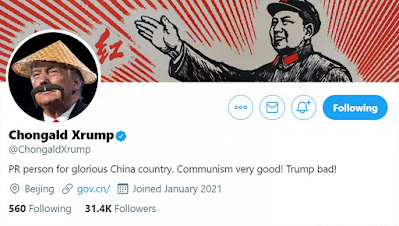 The Babylon Bee offers a clever satirical piece on Trump sneaking back on Twitter.

U.S.—Donald Trump was permanently banned from Twitter today, being a crazy fringe extremist who also happens to be the president of the United States.

But the ever-clever Trump, always known as the smartest man in the room, has managed to get back on the social network by disguising himself as one Chongald Xrump, PR specialist for the Chinese Communist Party.

Trump is reportedly attempting to build a following by tweeting about how good Uighur concentration camps are and how nice the Chinese government is, since those things are not banned under Twitter's terms of service. Once he has enough followers, he'll remove his Asian rice hat and false Fu Manchu mustache and begin tweeting about the rigged election once again.