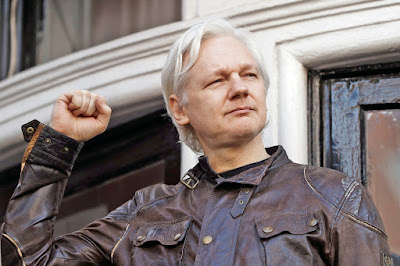 Kyle Smith at the New York Post offers a piece on why Julian Assange should not be pardoned.

For years, Julian Assange was an icon to the cultural and political left. Benedict Cumberbatch played him as a kind of sexy superspy for the cyber age in “The Fifth Estate,” back in 2013. Assange was depicted as a dashing “whistleblower” and hero. A French fashion magazine called him one of the 20 best-dressed men in the world, and Time magazine hailed him as one of the most influential people in the world in 2011.

That was back when Assange was BFFs with the extreme left. What he was mainly known for at the time, apart from being charged with rape in Sweden, was publishing a trove of documents and videos from a disillusioned Army specialist named Bradley Manning (today living as a woman named Chelsea and enjoying life as a free person after being pardoned by President Obama) on his WikiLeaks site with no editing or redacting whatsoever. There may be a public interest in some classified military information, but news organizations that receive such leaks generally weigh the public interest against the potential to do harm to military people who have done no wrong. Assange, however, scoffs at journalists as being too weak-kneed to risk pushback from powerful forces. Assange is to journalism what the Joker is to comedy.

On Jan. 4, Assange is facing an extradition hearing in London to determine whether he can be dragged back to the United States to be prosecuted under the Espionage Act, which makes it a felony to publish classified information but has never been used in a similar situation before. If extradition succeeds and Trump doesn’t pardon him, Assange will claim he has an absolute right to publish true information under the First Amendment. We’ll see about that.

Labels: Julian Assange should not be pardoned, Kyle Smith, The Case Against Assange, The New York Post