A Little Humor: The Rancher, The New Bride And The Old Horse 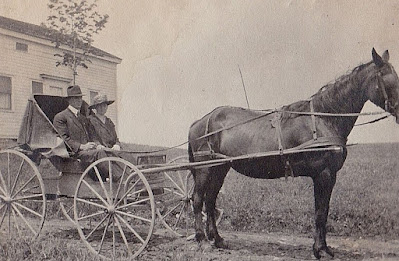 An old-time small rancher out West was taking his new mail order bride from Philadelphia back to his small spread.

They were riding along a rocky road in a carriage pulled by an old gray mare when the elderly horse stumbled.

“That’s once,” the rancher said.

A half hour later, the old horse stumbled again.

After the aging horse stumbled again, the rancher pulled his pistol out calmly and shot the horse dead.

His wife, unaccustomed to the ways of the West, said, “That was terrible. How could you shoot that poor old horse?”

The rancher, who was unhitching the dead horse, looked up at his new bride and said, “That’s once.”

Labels: A Little Humor, joke, The Rancher the New Bride and the Old Horse