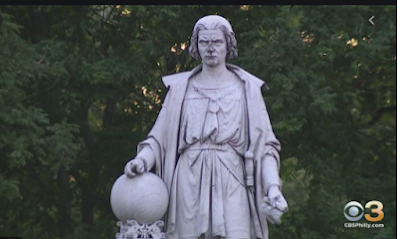 Ralph Cipriano at Bigtrial.net offers a piece on the legal battle to free the statue of Columbus in South Philadelphia, where I grew up and still live.

In the process, the judge blasted the Kenney administration for lawless behavior. In a seven-page order, the judge pointed out seven errors of law committed by city officials. At the time, the servants of the woke Mayor Kenney were trying to give the more than 100 year-old statue the bum's rush for political reasons, without engaging in any due process for removing a historical monument, as mandated under the City Charter.

But yesterday afternoon, Judge Patrick called Kenney and crew on it.

"It is baffling to this court how the city of Philadelphia wants to remove the statue without any legal basis," Judge Patrick wrote in an order issued this afternoon. "The city's entire argument and case is devoid of any legal foundation."

Under the leadership of Mayor Kenney, who was pandering to social justice protesters, the city tried to justify its unlawful eviction of Columbus by saying the statue posed an imminent threat to public health and safety. The imminent threat?  Alleged "civil unrest" associated with last year's George Floyd protests.

But Judge Patrick found that the city was basing its witch hunt against Columbus on a few "transient and isolated incidents." In the city's legal arguments, the judge found that "no evidence of a history of civil unrest surrounding, and with respect to the statute existed, nor has any been present since June 23, 2020."

George Bochetto, the lawyer who won the appeal of the city's decision to evict Columbus, had a message for Mayor Kenney last night.

"I think the mayor needs to take a deep breath and start realizing he was elected mayor of an elaborate city government structured through the city charter, and he was not elected tyrant," Bochetto said.