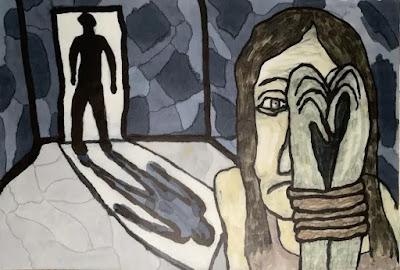 David Vergun at the DOD News offers a piece on the horrendous crime of human trafficking:

Human trafficking is a crime in which force, fraud or coercion is used to compel a person to perform labor, services or commercial sex. It affects all populations: adults, children, men, women, foreign nationals and U.S. citizens, and all economic classes.

In the videos, eight survivors relate their experiences being trafficked into commercial sexual exploitation, forced labor, and being turned into child soldiers. They discuss what they wish they had done differently and how others could have helped. Several of the survivors' stories have a connection to the Defense Department.

For example, Kalei Grant tells of being purchased by military members in Hawaii.

"We would be driven to military bases and nearby bars where [our trafficker] would force us to look for the drunk military soldiers and proposition them. The transactions would happen everywhere — in barracks, in homes and apartments, on military bases in warehouses, in military personnel vehicles, in personal cars, and while service members were on and off duty," she said.

In another story, Kumar, who prefers not to give his whole name, tells of being trafficked into forced labor by subcontractors in India who charged each potential worker exorbitant recruitment fees to obtain jobs with good pay. The subcontractors then used classic bait and switch techniques to force these food service workers into hard labor when they arrived in Afghanistan, which paid so little they could not get out of debt.

Tina Frundt tells of being trafficked when she was 13 by an older man in her neighborhood. Her mother, who worked for DOD for over a decade, kept the trauma and trouble that her daughter was going through a secret from everyone.

"What happened to me was a secret she kept, maybe because of the shame and guilt, maybe because she feared for her clearances. We create an environment where people actually need help, but everyone's scared to talk about it," Frundt said.

A former child soldier, Carlos Dimas told how guerillas in El Salvador recruited him and his best friend when they were both 14. One of the death squads subsequently killed his friend. Dimas eventually escaped and today he and his family, including his son who is in the U.S. Army, live in the United States.

Since the passage of the Trafficking Victims Protection Act in 2000 (Public Law 106-386), many new programs have been created to help victims become survivors and reclaim their lives.

The TVPA laid out a 3-P framework – prevention, prosecution, protection and assistance – for combating human trafficking.

You can watch the videos via the below link: