My Threatcon Column: President Biden's Afghanistan Surrender To The Taliban 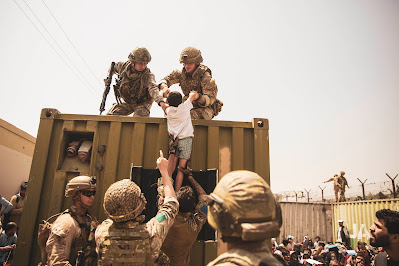 My Threatcon column on President Biden’s shameful surrender of Afghanistan to the terroristic and murderous Taliban was posted online at Counterterrorism magazine's website.

As I follow the news of the fall of Afghanistan, my thoughts are of the Vietnam War.

My role in the Vietnam War was a minor one. I served as an 18-year-old seaman on the USS Kitty Hawk as the aircraft carrier performed combat operations on "Yankee Station" off the coast of North Vietnam in 1970 and 1971.

Like most Vietnam veterans and many Americans, I felt a gut-punch when the Congress cut off funds to South Vietnam in 1975, ensuring a swift Communist victory over the South Vietnamese after America had expended so many lives and funds to hold the North Vietnamese aggressors at bay.

Now, once again, to our shame, we are abandoning a country where we have expended many American lives and funds. In my view, the withdrawal from Afghanistan is another dark day in American history.

Former CIA Director and Secretary of Defense Robert Gates noted famously in his memoir that Joseph Biden “has been wrong on nearly every major foreign policy and national security issue over the past four decades."

Biden’s latest error in judgement, the hasty withdrawal from Afghanistan and surrender to the terroristic and murderous Taliban, will go down in history as a colossal blunder with deadly affects.

I suspect that a second war on terrorism will commence once again from Afghanistan.

Kenneth R. Timmerman, a Middle East correspondent who was held prisoner in 1982 for 24 days by Fatah guerrillas in Lebanon, offers a piece at the New York Post on Biden and Afghanistan.

“For decades, Joe Biden has touted himself as a foreign policy genius. As a United States senator, he never had to make a decision or bear responsibility for running off at the mouth. As vice-president, he was given backwaters such as Ukraine that he reportedly turned into a family piggy bank,” Kenneth R. Timmerman wrote in the New York Post. “But now he is president. He owns the utter disaster that Afghanistan has become; and the sudden about-face of the Pentagon to send 3,000 fully armed combat troops back into the fray shows that even the woke military bosses Biden installed can wake up and smell the coffee.”

Retired four-star general and Fox News senior strategic analyst Jack Keane stated on Fox, “It's a sad, frustrating moment to watch an ill-conceived -- and I emphasize ill-conceived, hasty withdrawal -- turn into what is now an embarrassing retreat. And why is that? Well, the IG from the Pentagon just reported the Taliban offensive began in May of this year, a month after President Biden made the announcement that we were pulling all U.S. troops out by August 31.

“The Taliban knew full well that the United States, in that short period of time, had to close seven military bases, that the focus of the U.S. leadership and its troops would be on just that. No time and no resources to help the Afghan security forces during a major Taliban offensive. And by that I mean sustained, decisive air support, which they always had in the past, to stop normal Taliban offensives that occur in that period of time.”

Keane, perhaps the best military mind in America, noted that warfare in Afghanistan is seasonal. He said that the Taliban begins fighting in the spring and the fighting ends in the fall.

“And the Taliban pack up their bags and go to Pakistan during the winter. So why are we doing a withdrawal right in the middle of the fighting season, in the heart of it? The withdrawal should have been done during, what? The winter. And we should have extended our withdrawal out until sometime next year to get all of that done and make certain that as the Taliban offensive came this year, we were able to provide the resources to counter that offensive.”

In an earlier appearance on Fox, Keane warned that Al Qaeda could very well set up safe havens if the U.S. completely leaves Afghanistan.

"Al Qaeda did the same prior to the 9-11 attack. They bombed two embassies in Africa and the U.S.S. Cole. If we had destroyed the Al Qaeda safe haven in Afghanistan, there wouldn't have been a 9-11. Safe havens are critical to the radical Islamist movement,” Keane said. “"The president mentioned it himself. The reason why we're in Syria, Iraq, Eastern Africa is to prevent those organizations, radical Islamists, from having what? A safe haven from which to attack the United States. This is a multi-generational war. That is why we're still doing that. To walk away from Afghanistan and say this is not a multi-generational conflict is to ignore the reality of what is taking place."

Who are the Taliban?

According to the BBC, the Taliban, or "students" in the Pashto language, emerged in the early 1990s in northern Pakistan following the withdrawal of Soviet troops from Afghanistan. The Taliban, once in power, introduced or supported punishments in line with their strict interpretation of Sharia law, such as public executions of convicted murderers and adulterers, and amputations for those found guilty of theft. Men were required to grow beards and women had to wear the all-covering burka.

“The Taliban also banned television, music and cinema, and disapproved of girls aged 10 and over going to school,” the BBC noted. “They were accused of various human rights and cultural abuses.”

In closing, one should remember that the 9/11 attacks on the World Trade Center and the Pentagon were planned in Afghanistan by bin Laden and al-Qaeda, who were protected and supported by the Taliban.

President Bush took them out. President Biden let them back in.

Paul Davis, a long-time contributor to the Journal writes the online Threatcon Column.

Note: The U.S. Defense Department released the above photo.