A Little Humor: The Babylon Bee: Obama's Party Ruined As Mansion Sinks Into Sea Thanks To Climate Change 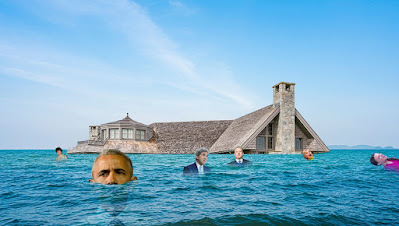 The Babylon Bee mocks former President Obama’s big birthday bash (despite his followers' warnings to others about large get-togethers due to COVID-19) and his and his progressive guests’ fear of climate change.

MARTHA'S VINEYARD, MA—Well, this is tragic news: Barack Obama's long-awaited birthday bash has been ruined by climate change as his mansion sank into the sea thanks to global warming.

As guests participated in the activities, from fun games like " Pen the Drone on the Middle Eastern Country" to a rousing session of Settlers of Yemen, the sound of crashing water caused everyone to run outside.

"How dare you!" shouted Greta Thunberg, lecturing the wave on how it's just supposed to consume evil white men.

"Aw, man!" said a disappointed Obama as he swam away. "I was looking forward to that Predator drone-shaped cake—it looked delicious!"

"I knew I shouldn't have invested in a $12 million-dollar mansion when I've warned people over and over again that it would be underwater in just a few years."

Many guests were soaked or swept away into the sea, though John Kerry and Al Gore

called their pilots and got picked up in their private jets.

At publishing time, Obama had purchased yet another multi-million-dollar mansion on the new Atlantic coast in eastern Kansas.