Giovanni's Ring: My Washington Times 'On Crime' Column Looks At Undercover Officer's Infiltration Of Organized Crime And The Real Sopranos In New Jersey 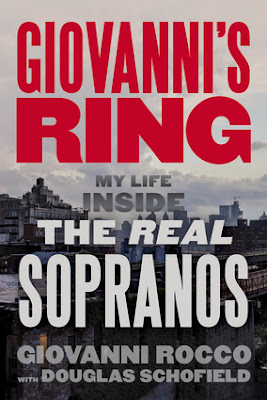 The Washington Times published my On Crime column on Giovanni’s Ring.

The many fans of “The Sopranos” TV series might be interested in reading about a cop who infiltrated the real deal. Giovanni Rocco, a New Jersey police officer, detailed as an FBI undercover operative, infiltrated the notorious DeCavalcante Cosa Nostra crime family in New Jersey.

Mr. Rocco offers a story of his time undercover in “Giovanni’s Ring: My Life Inside the Real Sopranos.” The book, co-authored by Douglas Schofield, details how a 26-year-veteran New Jersey cop nearing retirement joined an FBI task force targeting the DeCavalcante family, the organized crime group that was reportedly the model for the fictional Soprano family in the popular HBO series.

Raised on the streets of New Jersey, Mr. Rocco knew the wiseguys and how they spoke, acted, and conducted their criminal enterprises. He spent two and a half undercover with the treacherous and violent mobsters while pretending to be a thief named “Giovanni Gatto.” The FBI case, codenamed Operation Charlie Horse, had Mr. Rocco aligned himself with several mobsters until he came directly under Charlie Stango, a capo, or captain, in the DeCavalcante crime family.

... Mr. Rocco said the “The Sopranos” depicted a genuine look into the life of the Italian American Cosa Nostra and had several similarities to the DeCavalcante crime family.

“The DeCavalcante Crime family is one of the oldest Italian American Crime families in the United States based out of the NY/NJ areas,” Mr. Rocco explained. “They are a very close-knit organization with old school Cosa Nostra beliefs with a strong propensity for violence. Their reputation is the reason that other crime families respect them and have contracted out murder, extortion, and other crimes to them.”