Fox News National Security Correspondent Slams Biden For ‘Empty Words’ On Afghanistan Evacuations: ‘We Did Not Keep Our Promise And It Is A National Shame’ 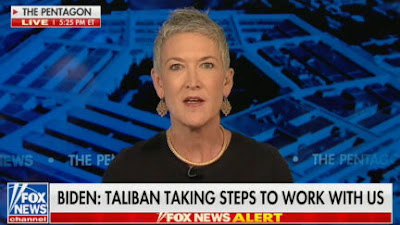 Mediaite.com offers a piece on Fox News’ Jennifer Griffin, an outstanding national security reporter, on President Biden’s speech about the hasty and disorganized withdrawal from Afghanistan.

The president spoke Tuesday afternoon on the continued Afghanistan evacuations, saying that the United States is on pace to evacuate everyone by the August 31st deadline, but is planning for contingencies. He did not take questions.

Minutes after he spoke, Griffin appeared on The Five and reacted by saying, “What continues to be amazing to me is that every time the president speaks, he sets a deadline that then the military has to scramble to adjust to meet. He doesn’t seem to understand what it takes to either evacuate people, the build-up, the time needed, the amount of people that he has promised that he was going to get out.”