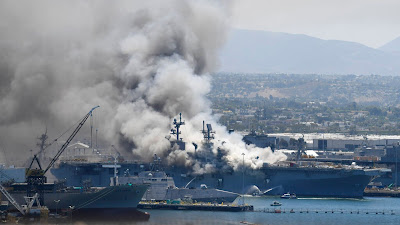 Louis Casiano at Foxnews.com offers a piece on the sailor accused of setting the fire on USS Bonhomme Richard.

The sailor accused of setting fire to a naval amphibious assault ship that burned for five days and injured 71 people voiced hatred of the Navy and attempted to become a Navy SEAL, according to a search warrant affidavit.

Investigators with the Naval Criminal Investigative Service (NCIS) believe Ryan Sawyer Mays, 20, set the blaze on July 12, 2020 that destroyed the USS Bonhomme Richard while docked in San Diego, an NCIS special agent wrote in the September filing. The fire raged for several days and forced the Navy to scrap the ship, as it would have cost up to $3 billion to make repairs that would have taken between five and seven years to complete.