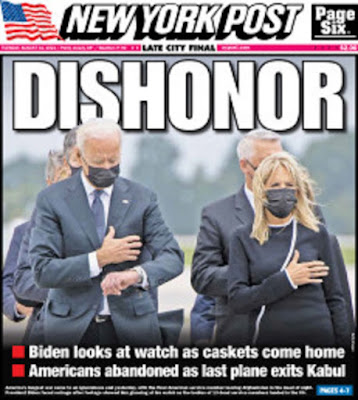 The New York Post offers a cover story on President Biden’s disrespectful actions of repeating check his watch during the ceremony as the remains of the military members killed in Afghanistan returned to America.

Family members of the US Marines killed in last week’s suicide terror attack at the Kabul airport are slamming President Joe Biden for his behavior at the dignified transfer ceremony over the weekend — with one Gold Star father accusing the commander-in-chief of “the most disrespectful thing I’ve ever seen,” as he repeatedly looked at his watch during the ceremony.

Darin Hoover, the father of Marine Staff Sgt. Taylor Hoover, told Fox News’ Sean Hannity that Biden checked the time every single time a flag-draped coffin was removed from the hold of the Air Force C-17 Globemaster plane during Sunday’s ceremony at Dover Air Force Base in the president’s home state of Delaware.

“I actually leaned into my son’s mother’s ear and I said, ‘I swear to God, if he checks his watch one more time …’,” Schmitz recalled, “and that was only probably four times in. I couldn’t look at him anymore after that, just considering, especially, the time and why we were there. I found it to be the most disrespectful thing I’ve ever seen.”