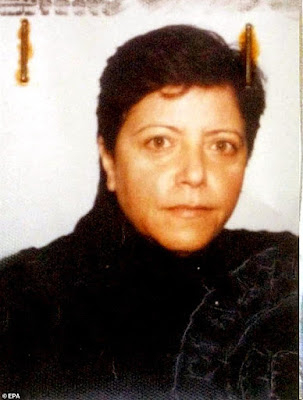 Laurence Dollimore at the Daily Mail offers a piece on a female Camorra crime boss was recently arrested.

An alleged female mafia boss has been arrested while trying to board a flight to the Costa del Sol to 'visit her daughter'.

Maria Licciardi, 70, was cuffed at Ciampino airport in Rome Saturday while attempting to fly to Malaga in southern Spain..

The powerful boss, alleged to be part of the notorious Neapolitan mafia known as the Camorra, was hoping to visit her daughter and to 'attend to some business', according to Italian newspaper La Repubblica.

But she was arrested while queueing at the check-in desk by the Carabineros Corps – Italy’s  military police.

Ms Licciardi, known as 'la piccoletta' or the little one due to her small stature, was with two associates at the time and went with the officers quietly, according to reports.

She is accused of mafia-type association, extortion, receiving ill-gotten funds and auction rigging.