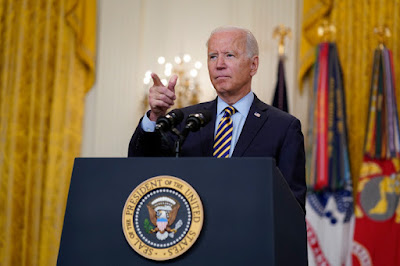 Former CIA Director and Secretary of Defense Robert Gates noted famously in his memoir that Joseph Biden “has been wrong on nearly every major foreign policy and national security issue over the past four decades."

Biden is nothing if not consistent, as he is once again wrong with his hasty and dangerous decision to withdraw from Afghanistan.

I recall the gut-punch I felt when the Congress cut off funds to South Vietnam in 1975, ensuring a Communist victory after America had expended so many lives and funds to hold the North Vietnamese aggressors at bay. Once again, to our shame, we are abandoning a country where we have expended many American lives and funds.

Kenneth R. Timmerman offers a piece at the New York Post on Biden and Afghanistan.

For decades, Joe Biden has touted himself as a foreign policy genius. As a United States senator, he never had to make a decision or bear responsibility for running off at the mouth. As vice-president, he was given backwaters such as Ukraine that he reportedly turned into a family piggy bank.

But now he is president. He owns the utter disaster that Afghanistan has become; and the sudden about-face of the Pentagon to send 3,000 fully armed combat troops back into the fray shows that even the woke military bosses Biden installed can wake up and smell the coffee.

President Biden will own the fall of Kabul — when the real killing begins (nypost.com)