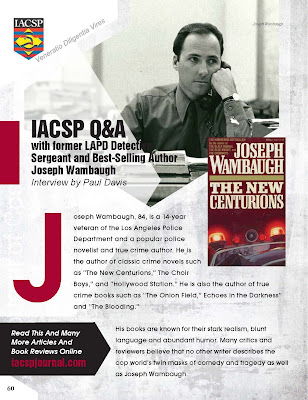 Counterterrorism magazine published my Q&A with former LAPD Detective Sergeant and best-selling novelist and true crime author Joseph Wambaugh.
You can read the Q&A via the above and below pages (click on them to enlarge) or the below text: 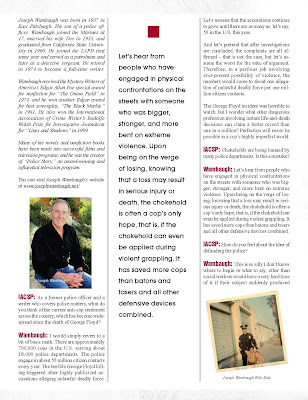 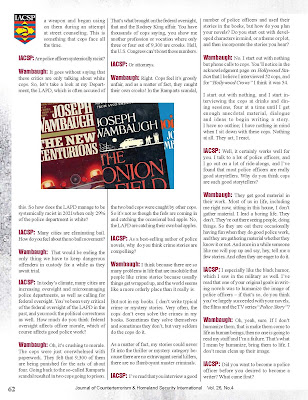 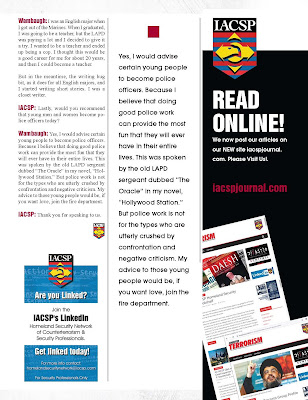 Joseph Wambaugh, 84, is a 14-year veteran of the Los Angeles Police Department and a popular police novelist and true crime author. He is the author of classic crime novels such as “The New Centurions,” The Choir Boys,” and “Hollywood Station.” He is also the author of true crime books such as “The Onion Field,” Echoes in the Darkness” and “The Blooding.”

His books are known for their stark realism, blunt language and abundant humor. Many critics and reviewers believe that no other writer describes the cop world’s twin masks of comedy and tragedy as well as Joseph Wambaugh.

Joseph Wambaugh was born in 1937 in East Pittsburgh. The son of a police officer, Wambaugh joined the Marines at 17, married his wife Dee in 1955, and graduated from California State University in 1960. He joined the LAPD that same year and served as a patrolman and later as a detective sergeant. He retired in 1974 to become a full-time writer.

Wambaugh received the Mystery Writers of America’s Edgar Allan Poe special award for nonfiction for “The Onion Field” in 1974, and he won another Edgar award for best screenplay, “The Black Marble” in 1981. He also won the International Association of Crime Writer’s Rodolfo Walsh Prize for Investigative Journalism for “Lines and Shadows” in 1989.

IACSP: As a former police officer and a writer who covers police matters, what do you think of the current anti-cop sentiment across the country, which has become widespread since the death of George Floyd?

Wambaugh: I would simply revert to a bit of basic math. There are approximately 700,000 cops in the U.S. serving about 18,000 police departments. The police engage in about 55 million citizen contacts every year. The terrible George Floyd killing triggered other highly publicized accusations alleging unlawful deadly force. Let’s assume that the accusations continue to grow until there are as many as, let’s say, 55 in the U.S. this year.

And let’s pretend that after investigations are concluded, the complaints are all affirmed – that is not the case, but let’s assume the worst for the sake of argument. Therefore, in a perilous job involving ever-present possibility of violence, the numbers would come to about one allegation of unlawful deadly force per one million citizen contacts.

The George Floyd incident was horrible to watch, but I wonder what other dangerous profession involving instant life-and-death decisions can claim a better record than one in a million? Perfection will never be possible in a cop’s highly imperfect world.

IACSP: Chokeholds are being banned by many police departments. Is this a mistake?

Wambaugh: Let’s hear from people who have engaged in physical confrontations on the streets with someone who was bigger, stronger, and more bent on extreme violence. Upon being on the verge of losing, knowing that a loss may result in serious injury or death, the chokehold is often a cop’s only hope, that is, if the chokehold can even be applied during violent grappling. It has saved more cops than batons and tasers and all other defensive devices combined.

IACSP: How do you feel about the idea of defunding the police?

Wambaugh: This is so silly I don’t know where to begin or what to say, other than social workers would have a very hard time of it if their subject suddenly produced a weapon and began using on them during an attempt at street counseling. This is something that cops face all the time.

Wambaugh: It goes without saying that these critics are only talking about white cops. So, let’s take a look at my Department, the LAPD, which is often accused of this. So how does the LAPD manage to be systemically racist in 2021when only 29% of the police department is white?

IACSP: Many cities are eliminating bail. How do you feel about the no bail movement?

Wambaugh: That would be ending the only thing we have to keep dangerous offenders in custody for a while as they await trial.

IACSP: In today’s climate, many cities are increasing oversight and micromanaging police departments, as well as calling for federal oversight. You’ve been very critical of the federal oversight of the LAPD in the past, and you mock the political correctness as well. How much do you think federal oversight affects officer morale, which of course affects good police work?

Wambaugh: Oh, it’s crushing to morale. The cops were just overwhelmed with paperwork. They felt that 9,300 of them are being punished for the acts of about four. Going back to the so-called Ramparts scandal resulted in two cops going to prison. That’s what brought on the federal oversight, that and the Rodney King affair. You have thousands of cops saying, you show me another profession or vocation where only three or four out of 9,300 are crooks. Hell, the U.S. Congress can’t boast those numbers.

Wambaugh: Right. Cops feel it’s grossly unfair, and as a matter of fact, they caught their own crooks! In the Ramparts scandal, the two bad cops were caught by other cops. So it’s not as though the feds are coming in and catching the occasional bad apple. No, the LAPD are catching their own bad apples.

IACSP: As a former police officer and a writer who covers police matters, what do you think of the current anti-cop sentiment across the country, which has become widespread since the death of George Floyd?

Wambaugh:  I think because there are so many problems in life that are insoluble that people like crime stories because usually things get wrapped up, and the world seems like a more orderly place than it really is.

As a matter of fact, my stories could never fit into the thriller or mystery category because there are no extravagant serial killers, there are no flamboyant master criminals.

IACSP:  I’ve read that you interview a good number of police officers and used their stories in the books, but how do you plan your novels? Do you start out with developed characters in mind, or a theme or plot, and then incorporate the stories you hear?

Wambaugh: No. I start out with nothing but phone calls to cops. You’ll notice in the acknowledgment page on Hollywood Station that I believe I interviewed 52 cops, and for “Hollywood Crows” I think it was 54.

I start out with nothing, and I start interviewing the cops at drinks and dining sessions, four at a time until I get enough anecdotal material, dialogue and ideas to begin writing a story.

I have no outline; I have nothing in mind when I sit down with these cops. Nothing at all. They act, I react.

Wambaugh: They get good material in their work. Most of us in life, including me right now, sitting in this house, I don’t gather material. I lead a boring life. They don’t. They’re out there seeing people, doing things. So they are out there occasionally having fun when they do good police work, and they are gathering material whether they know it or not. And once in a while someone like me will pop up and say, hey, tell me a few stories. And often they are eager to do it.

IACSP: I especially like the black humor, which I saw in the military as well. I’ve read that one of your original goals in writing novels was to humanize the image of police officers – if that’s so, do you think you’ve largely succeeded with your novels, the films and the TV series “Police Story”?

Wambaugh: Oh, yeah, sure. If I don’t humanize them, that is make them come to life as human beings, then no one is going to read my stuff and I’m a failure. That’s what I mean by humanize, bring them to life. I don’t mean clean up their image.

IACSP: Did you want to become a police officer before you desired to become a writer? What came first?

Wambaugh: I was an English major when I got out of the Marines. When I graduated, I was going to be a teacher, but the LAPD was paying a lot and I decided to give it a try. I wanted to be a teacher and ended up being a cop. I thought this would be a good career for me for about 20 years, and then I could become a teacher.

But in the meantime, the writing bug bit, as it does for all English majors, and I started writing short stories. I was a closet writer.

Wambaugh: Yes, I would advise certain young people to become police officers. Because I believe that doing good police work can provide the most fun that they will ever have in their entire lives. This was spoken by the old LAPD sergeant dubbed “The Oracle” in my novel, “Hollywood Station.” But police work is not for the types who are utterly crushed by confrontation and negative criticism. My advice to those young people would be, if you want love, join the fire department.

IACSP: Thank you for speaking to us. 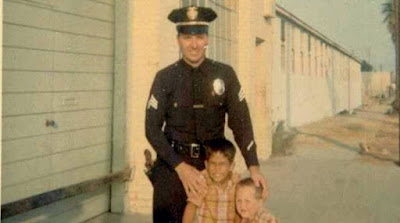 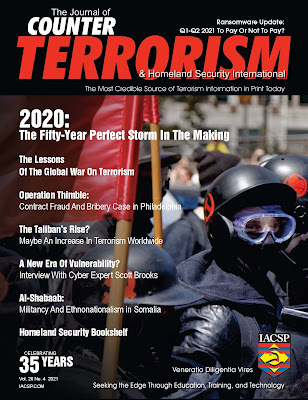