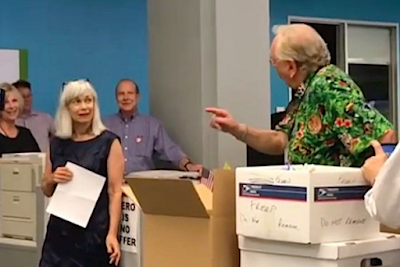 Ralph Cipriano at BigTrial.net offers a post on former Philadelphia Inquirer columnist Stu Bykofsky’s dust up at his retirement party.

On the afternoon of July 17, 2019, former Inquirer Editor and two-time Pulitzer Prize winner Bill Marimow was reading an email from his daughter, Ann.

"Everyone is asking about the Inga Saffron goodbye speech story that's going viral among reporters -- and noting that Dad is featured in the photos," she wrote. "You'll have to fill me in when we talk next."

But Marimow could not wait to give his take on the fireworks that transpired when Saffron, the Inquirer's Pulitzer Prize winning architecture critic, trashed former Daily News and Inquirer columnist Stu Bykofsky at his going-away party as a sexist, ethically challenged print dinosaur with "a taste for child prostitutes in Thailand."

"Dear Annie," Marimow wrote on the same day that an incendiary story and four video clips from the party were posted on phillymag.com. "Inga assailed Stu in a totally inappropriate way in front of virtually the entire newsroom. It was incredibly tense and at one point, I was concerned that Stu was going to physically accost her."

"David Preston, who organized the farewell party, invited Inga to speak because he thought that the tension between them was friendly and fake animosity. It turned out to be intense dislike, and David Preston -- along with everyone else present -- was chagrined."

"I saw you in the background of the picture in Philadelphia magazine from the Byko going away party," Ceisler wrote. "Wow, that was really rude of Inga . . . I don't know why anyone would have her speak at a going away party . . . or even a funeral for that matter. Really poor form."

Saffron's remarks made at Bykofsky's July 12, 2019 going-away party prompted the retiring reporter of 47 years to file a lawsuit against the Inquirer and Saffron alleging defamation.

It's a lawsuit that's not going away. On Dec. 14, 2020, Philadelphia Common Pleas Court Judge James Crumlish III ruled against the Inquirer's motion to have Bykofsky's complaint dismissed.

The case is now in the discovery stage. But from the looks of what transpired in after-party emails among the Inquirer's top management, it might be a smart move to settle the case before it ever goes to trial.

,,, On July 21, 2019, another old pal of Marimow's, former Penn State Journalism Professor Tony Barbieri, wrote to ask if the Byko party was "a normal Inquirer sendoff." If so, Barbieri quipped, he was planning to invite David Simon to speak at Marimow's going-away party.

For years, Simon,  a former Baltimore Sun reporter who hit it big as the creator of the HBO series "The Wire," has waged a war of words against Marimow, his former editor at the Baltimore Sun.

"Inga's comments were disgraceful -- a blatant disregard for all standards of civility," Marimow wrote back to Babieri. About Barbieri's suggestion for guest speakers at Marimow's going-away party, Marimow wrote,"There's no doubt that Simon would do it."