'The Russians Have Videos Of Me Doing Crazy F***ing Sex!' Hunter Biden Is Seen In Unearthed Footage Telling Prostitute That Russian Drug Dealers Stole ANOTHER Of His Laptops 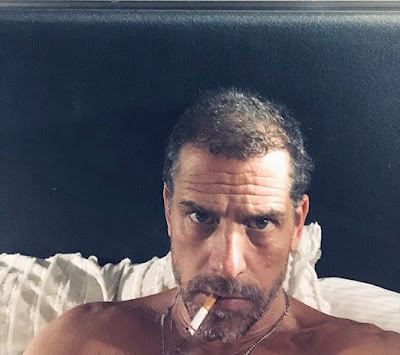 The Daily Mail published a video of President Biden’s Son Hunter Biden telling a prostitute that Russians stole another one of his laptops.

Hunter Biden claimed Russians stole another one of his laptops for blackmail while he was close to overdosing in a Las Vegas hotel room, DailyMail.com can reveal.

The alleged incident would mean Hunter lost a total of three computers - the first abandoned at a Delaware computer store and the second seized by federal agents - each likely to hold sensitive information on President Joe Boden and the embarrassing pictures, videos and communications of his son.

The third laptop still appears to be missing – and was taken by Russian drug dealers after they partied with Hunter in Vegas, he told a prostitute in a conversation caught on camera.