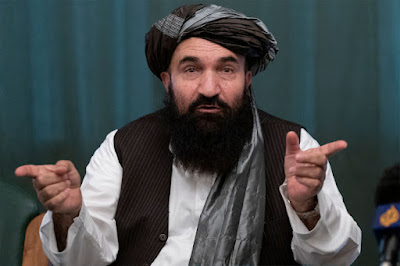 Paul Sperry at the New York Post reports that a terroristic leader of the Taliban was released by President Obama in exchange for an American deserter in Afghanistan.

When President Barack Obama released five Taliban commanders from the Guantanamo Bay prison in exchange for an American deserter in 2014, he assured a wary public that the dangerous enemy combatants would be transferred to Qatar and kept from causing any trouble in Afghanistan.

In fact, they were left free to engineer Sunday’s sacking of Kabul.

Soon after gaining their freedom, some of the notorious Taliban Five pledged to return to fight Americans in Afghanistan and made contacts with active Taliban militants there. But the Obama-Biden administration turned a blind eye to the disturbing intelligence reports, and it wasn’t long before the freed detainees used Qatar as a base to form a regime in exile.

Eventually, they were recognized by Western diplomats as official representatives of the Taliban during recent “peace” talks.

Earlier this year, one of them, Khairullah Khairkhwa, actually sat across the table from President Biden’s envoy to Afghanistan, Zalmay Khalilzad, in Moscow, where Khairkhwa was part of the official Taliban delegation that negotiated the final terms of the US withdrawal. The retreat cleared a path for the Taliban to retake power after 20 years.

Taliban leader was freed from Guantanamo in 2014 swap by Obama (nypost.com)