50th Anniversary of 'The Unmaking Of A Mayor': A Look Back At Bill Buckley's Joyous NY Mayoral Run 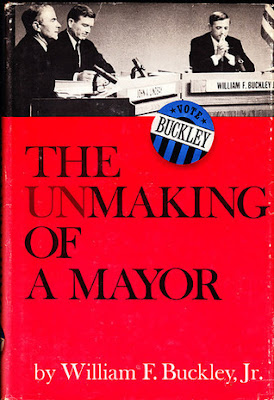 When William F. Buckley Jr was running for mayor of New York City in 1965, he was asked what he would do if he won the election, and Buckley famously responded, "Demand a recount."

Seth Lipsky at the New York Post looks back at Buckley's book on the mayoral election, The Unmaking of a Mayor.


What a nifty coincidence, if that’s what it is. Just as Mayor de Blasio has put New York City into a downward dive on the road to the 1970s, New Yorkers are about to get a 50th anniversary edition of William F. Buckley Jr.’s book about running for mayor.
Buckley’s 1965 mayoral campaign failed. He won but 13 percent of the vote in the election that handed up John Vliet Lindsay as the 103rd mayor. But the campaign revitalized the conservative movement in New York — and America.
That’s a fact to savor at a juncture when, for the first time in a generation, the city is suffering under an all-Democratic city government. As things go downhill from the Giuliani-Bloomberg years, there is no one to blame but the party of Bill de Blasio and Melissa Mark-Viverito.
This is more dire than 1965. Back then, the Republicans still held, via Nelson Rockefeller, the governorship. Robert F. Wagner Jr.’s mayoralty was ending; the Democrats nominated Abe Beame.
The GOP chose as liberal a Republican as there was.
Lindsay was so liberal that when asked to explain his vote in Congress against legislation to combat pornography and Communism, he famously replied that they were major industries in his district. Lindsay was way to the left of the national Republican Party and Buckley way to the right of the state’s GOP.
Buckley ran on the ticket of the newly formed Conservative Party. “Why didn’t you run in the Republican Primary,” he later asked himself in a mock-interview that is included in the memoir, which is called “The Unmaking of a Mayor.”
“Why didn’t Martin Luther King run for Governor of Alabama?” is the quip with which he answered his own question. The memoir is full of the jaunty arguments and ripostes that made the founding editor of National Review such a celebrated figure.
You can read the rest of the piece via the below link: