The actor, who portrayed James Bond in 1969's On Her Majesty's Secret Service, turned 76 yesterday.

On Her Majesty's Secret Service is one my favorite James Bond films, despite not having the great Sean Connery as Bond. I watch the film every Christmas season, as the film takes place in Switzerland during Christmas.

Considering that George Lazenby had not acted before, I thought he gave a fine performance. He looked like Ian Fleming's Bond and he did the fight and action scenes very well. I regret he did not continue in the role.

On Her Majesty's Secret Service  was directed by Peter Hunt, who was faithful to Fleming's novel and the film also offered Telly Savalas as the mad criminal Ernst Stavro Blofeld and the beautiful Diana Rigg as Tracy, Bond's tragic lover.

I believe that On Her Majesty's Secret Service is one of the best Bond films.

You can read more about George Lazenby via the below link: 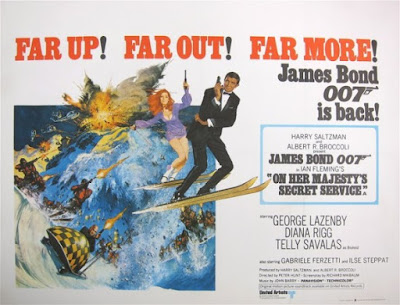