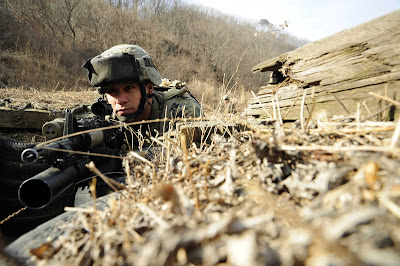 I find it difficult to respect a Commander-in-Chief who not once, but twice, referred to a Navy Corpsman as a "corpse-man." Did Obama think the decorated sailor was a mortician?

And I resent the Obama administration's attempts to promote social change via the U.S. military.

Betsy McCaughey offers a piece at the New York Post on the administration's efforts to make American combat troops co-ed.


President Obama is already weakening our military by shedding troops, weapons and ships. But even these cuts aren’t as dangerous as his misguided crusade for a gender-blind military.
“Valor has no gender,” Obama naively announced. True, but strength, speed and sharpshooting accuracy are gender-specific. A new 9-month, $36 million study conducted by the Marine Corps shows that the overwhelming majority of women Marines underperform on tasks such as running while wearing 100 pounds of gear, or carrying a wounded buddy to safety, or firing an M4 rifle to stop the enemy’s grenade.
These politically incorrect facts should make the Obama administration reconsider zealously opening all combat jobs to women.
Don’t get me wrong. Women already are making valuable contributions, and rising through the ranks. More than 90 percent of military roles are open to them. But Obama’s order would require elite combat units to include women, even though it means lowering standards.
Secretary of the Navy Ray Mabus brushes off the new research and insists all combat units should be co-ed. He claims “a more diverse force is a stronger force.”
In general, that’s true. Adding women to the mix enhances strategic thinking, whether it’s in business or in the military. But the Obama administration’s extreme application of gender diversity will cost soldiers their lives.
The research shows that co-ed combat units move slower, suffer more injuries and fire weapons less accurately than all-male units. Women shooting M4 rifles hit the target 28 percent of the time, compared with 44 percent for men. “When negotiating the wall obstacle, male Marines threw their packs to the top of the wall, whereas female Marines required regular assistance in getting their packs to the top.” OK in training, but not in war.
You can read the rest of the piece via the below link: