FBI: Preparing For The Pope 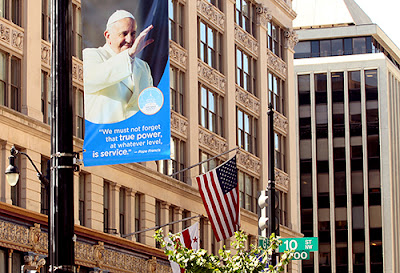 The FBI website offers a report on how the FBI and the other government agencies are preparing for the Pope's visit to the U.S.


Pope Francis’ visit to three major metropolitan areas during his first visit to the United States presents special security challenges. But federal agencies—working closely with state and local law enforcement—have a well-rehearsed template to follow.
The pope’s six-day visit to Washington, D.C., New York City, and Philadelphia—which begins September 22—has been designated a national special security event (NSSE) by the Department of Homeland Security (DHS). An NSSE is a significant national or international event determined by DHS to be a potential target for terrorism or criminal activity. Under the designation, the U.S. Secret Service is placed in charge of event security and the FBI has the lead on collecting intelligence and—should a crisis occur—managing the response. Examples of past NSSEs include State of the Union addresses, party conventions, United Nations General Assembly meetings, inaugural events, and the Winter Olympics and Super Bowl in 2002.
Agencies have been coordinating and training together for months for the pope’s visit, including holding tabletop exercises in each of the cities. Agency leaders briefed the media a week before the pope’s arrival after a dry-run exercise in New York City.
“Preparations for events such as this are a cooperative effort,” said Diego Rodriguez, assistant director in charge of the FBI’s New York Field Office. “No one federal, state, or local agency alone can carry out the measures necessary to secure the event.”
You can read the rest of the report via the below link: