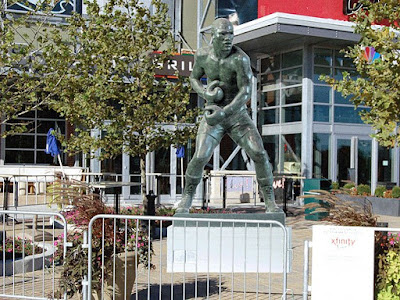 John N. Mitchell at the Philadelphia Inquirer offers a piece on the unveiling of Philly favorite Joe Frazier's statue in South Philadelphia.


For years, many have wondered why Philadelphia did not have statue honoring any of the legendary boxers the city has produced.

However, with the unveiling of a 12-foot bronze statue of Hall of Fame heavyweight champion Joe Frazier Saturday in front of Xfinity Live, the oversight has been rectified.

The rain held off long enough for Mayor Nutter to proclaim Saturday "Joe Frazier Day" in Philadelphia. Not long after he issued the proclamation under gray skies, the statue of Frazier throwing his famous left hook was revealed. Family and friends pulled the green shroud off the statue in front of several hundred fans at the corner of Pattison Avenue and 11th Street.

"This is the statue that you should be taking your picture next to," Nutter said, referencing the famous statue of the fictional Rocky Balboa with his hands raised in front of the Art Museum. "[Frazier] is a real fighter and a real person. They could have made a movie about his life and called it 'Joe.' It would be great, and it would be about someone who did something in this city, this country, and the world."