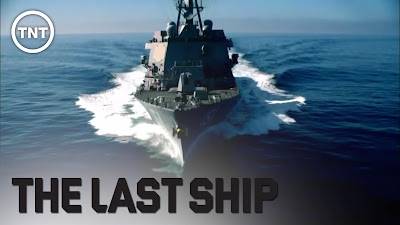 My wife and I watched and enjoyed the season finale of TNT's The Last Ship.

As a Navy veteran and a writer who covers the Navy, I'm often critical of the portrayal of Navy ships and sailors on TV and in films. The Last Ship is a TV series where my criticism is limited.

Considering that the show is basically a science fiction drama about the earth after a worldwide deadly virus attack, I was pleasantly surprised that the show was basically realistic about Navy ways.

I read the William Brinkley book the TV series was based on and although the novel was interesting, the TV series offers more action and drama than the novel.

Historyvshollywood.com is an interesting website that compares TV and movies to reality. I checked in to see how The Last Ship scored there. You can check it out via the below link:

You can also check out The Last Ship's website via the below link:

http://www.thelastshiptnt.com/
Posted by Paul Davis at 12:26 AM