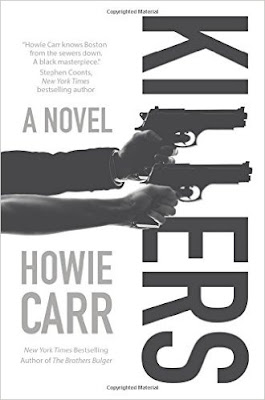 Howie Carr, a Boston Herald columnist, broadcaster and author of the crime novel Killers, offers a piece at the Daily Beast on why Boston mob boss wanted Whitey Bulger wanted him dead.


BOSTON – Did Kevin Weeks and his gangland boss Whitey Bulger want to murder me? Undoubtedly.
Did they ever concoct an actual scheme to accomplish their goal, either by blowing me up with military-grade explosives or by shooting me from a cemetery across the street from my home?
I’m not so sure about that.
I can’t say that I’m displeased that Weeks has put me back in the news, especially with the new Bulger biopic Black Mass opening wide. Weeks’ story about the 40 pounds of C-4 explosives that the gang obtained from corrupt FBI agents is great publicity for my new novel about the Boston underworld, Killers, which is available on Amazon and everywhere else.
Every knock a boost, as they say. There are worse things than being called a “vicious bastard” by a vicious bastard. I think I’ll use it as a blurb for the paperback edition.
Of course Weeks and Whitey knew where I lived—I was a neighbor of one of Weeks’ brothers. And Whitey did hate me. I had committed an offense he considered punishable by death. I had embarrassed his younger brother, the state Senate president, William M. Bulger. And I had done so in the worst possible way, by repeatedly linking the imperious pol to his serial-killing, cocaine-dealing gangster sibling.
You can read the rest of the piece via the below link: