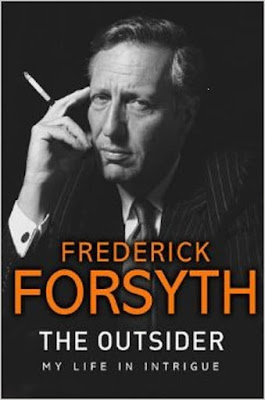 Frederick Forsyth, author of the classic thriller, The Day of the Jackal, and The Outsider: My Life in Intrigue, was interviewed by Corrie Bond-French at GL magazine.

Pilot, journo, writer, spy. Four words, a line filched from Le Carre, and there you have it; a neat summation of nigh on eight decades of an extraordinary life and career, with an incendiary revelation fizzing away between the covers.

Except Frederick Forsyth, the novelist who lit thriller tinder when he first penned The Day of the Jackal back in the 1970s, doesn't consider his endeavours in subterfuge to be quite so dangerously revelatory anymore.

It is fascinating stuff, and the irony is not lost that he is visiting Cheltenham next Friday for an extremely rare foray into the Literature Festival landscape to talk about his memoirs in The Outsider: My Life in Intrigue, as GCHQ looms large in the background. "I don't do many," he tells me. "I'm notorious for it, but the reason for it is that I am naturally reclusive."

Frederick Forsyth needs little introduction. One of the world's best-known and best- selling writers, he has written some of the most instantly recognisable titles of recent times, and it's quite an oeuvre, including The Day of The Jackal, The Odessa File, Dogs of War and The Fourth Protocol for starters. Many have been made into hit films (Day of The Jackal launched Edward Fox's career and Michael Caine and other such acting luminaries have been happily available for roles). In short, Frederick's contribution to the world's bookshelves set the standard for meticulous research and plausible, realistic plot-lines.