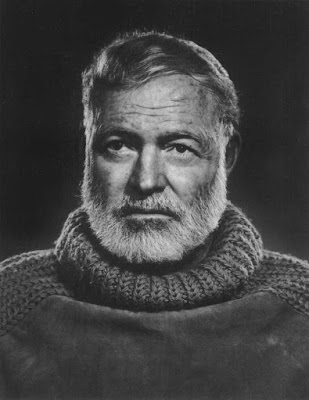 Nicolas Mills at the Daily Beast offers a piece on the museum exhibition on one of my favorite writers, Ernest Hemingway.


It has been more than 60 years since Ernest Hemingway was awarded the Nobel Prize for literature and 90 years since the appearance of his breakthrough collection of short stories, In Our Time. Yet, in all that time there has been no major museum exhibition devoted to Hemingway and his work.
Now all that has changed with the new landmark show, “Ernest Hemingway: Between Two Wars,” that the Morgan Library and Museum in New York has organized in partnership with the John F. Kennedy Presidential Library and Museum in Boston.
The exhibition, which opened at the Morgan on September 25 and remains there until January 31, is far more expansive than its title indicates. It starts with Hemingway as a high school student in Oak Park, Illinois, and continues past his World War II years.
...  “I felt that the Hemingway myth, or at least the popular perception of Hemingway, had come to overshadow and obscure the prose,” Declan Kiely, the show’s curator as well as the head of the Morgan’s literary and historical manuscripts, has said.
... In his famous account of the D-Day landing, “Voyage to Victory,” Hemingway’s ego is on display, but as he heads toward the Fox Green sector of Omaha Beach on a small landing craft with the troops who will go ashore, he is risking his own life as he records their and his anxiety in the face of the heavy fire coming from German shore batteries.
For most other writers, a war story like “Voyage to Victory” would have been the high point of their careers. For Hemingway, the story, with its focus on doing your job while facing your fears, was, as the Morgan’s exhibition reminds us, just one more episode in a life rich with intensely felt, brilliantly described episodes.
You can read the rest of the piece via the below link:
http://www.thedailybeast.com/articles/2015/09/30/papa-s-got-a-brand-new-museum-exhibit.html
Posted by Paul Davis at 4:36 PM