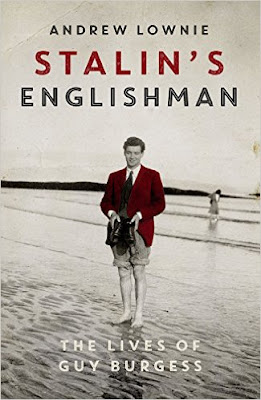 Andrew Lownie, the author of Stalin's Englishman: The Lives of Guy Burgess, unmasks the sixth man in the notorious Cambridge spy ring that included Kim Philby and Guy Burgess in the Daily Mail.


For more than 50 years, the identities of members of the infamous Cambridge Spy Ring have been the stuff of debate and fevered speculation. Four – Donald Maclean, Kim Philby, Guy Burgess, and Anthony Blunt – have been unmasked as Soviet agents.

A fifth is believed to have been the Bletchley Park and MI6 officer John Cairncross. Now author Andrew Lownie has unmasked a sixth Soviet spy at the heart of the Establishment – a brilliant MI6 physicist who sent nuclear secrets to the KGB which allowed the Russians to develop their own atom bomb…

To his colleagues in MI6, scientist Wilfrid Mann was known as ‘Atomic Man’, the conduit between Britain’s nascent nuclear programme and the team of specialists working under Robert Oppenheimer on America’s Manhattan Project in the desert of New Mexico.

But he also had a secret life as a Russian spy, working in the office next door to his fellow KGB agents Donald Maclean, Guy Burgess and Kim Philby in the British Embassy in Washington from 1943 to 1951.

You can also read an earlier post on Andrew Lownie's new book via the below link:

http://www.pauldavisoncrime.com/2015/09/new-biography-reveals-nortorious.html
Posted by Paul Davis at 12:17 AM