Our Man In Charleston: Britain’s Secret Agent In The Civil War South 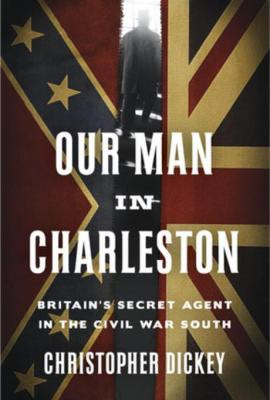 Veteran journalist and author Joseph C. Goulden offers a good review in the Washington Times of Christopher Dickey's Our Man in Charlestown: Britain's Secret Agent in the Civil War South.


Disgusted with the noisy support of slavery among his fellow residents of Charleston in the pre-Civil War era, attorney James L. Petigru famously declared, “South Carolina is too small for a republic and too large for an insane asylum.”
One person who certainly shared Petigru’s sentiments was Robert Bunch, the British consul, who was in the uncomfortable position of feigning agreements with the firebrand secessionists, whom he detested, and trying to keep Southern cotton flowing to the demanding textile mills back home.
A supply of the textile was essential to the British economy. Mills in Lancashire and elsewhere wove cloth in an industry that employed a million or more persons. Which is one reason that despite anti-slavery laws and public sentiment, Britain displayed a certain complacency about the “peculiar institution” of slavery.
Christopher Dickey’s book is an engrossing read on several levels. Through Bunch’s dispatches, unearthed in obscure archives throughout Britain, he provides keen insight into the mindset of a culture built on slave-holding. One recoils when a Bunch acquaintance, well-placed in planter society, casually relates how he routinely stripped slaves — male and female — and flogged them with a horsehide whip.
You can read the rest of the review via the below link: