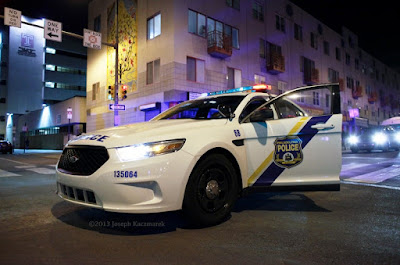 William Bender at the Philadelphia Daily News offers a piece on a justifiably outraged Philly Sgt who was denied the use of a Starbuck's restroom in an embarrassing episode.


Starbucks is drawing some Internet outrage after a Philadelphia police sergeant went on Facebook and lashed out against a "young blonde liberal" who he said wouldn't let him use the restroom last week at the coffee chain's 1301 Chestnut Street location.

The sergeant is not named in the original post, which was posted Friday on Starbucks' Facebook page by fellow Philadelphia Police Officer Joe Leighthardt. It has since been shared more than 11,500 times. Leighthardt said he knows the sergeant.

The unnamed sergeant said he was in full uniform and that the employee would not give him the key code to the bathroom because he was not a paying customer.

"As I walked out with my hand up and while she continued loudly to tell me about the bathroom down the street, I was even more astonished that the many customers and other employees said nothing and seemed indifferent," the sergeant wrote. "This is the world cops live in anymore. It's hip for this generation to berate and totally disrespect cops in front of the public and praise cop killers as the heroes of they're (sic) time."

Leighthardt wrote that employees of that Starbucks call police "several times a week for things as simple as someone sitting on the bench outside their property."

Note: On several of the ride-alongs I've done with Philly cops, the officers stopped at Starbuck's for coffee. I believe Starbuck's will lose a good chunk of business if cops and their supporters boycott them. Personally, I prefer Dunkin Donuts' coffee to Starbuck's.
Posted by Paul Davis at 11:37 PM