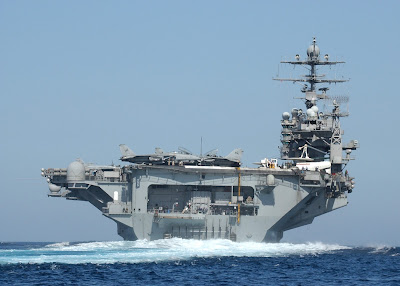 The New York Post offers a piece and a series of photos from the aircraft carrier USS Theodore Roosevelt.


ABOARD THE USS THEODORE ROOSEVELT IN THE PERSIAN GULF — Every day, the steam-powered catapult aboard this massive aircraft carrier flings American fighter jets into the sky, on missions to target the extremist Islamic State group in Iraq and Syria.
The USS Theodore Roosevelt, whose homeport is San Diego, California, is a key element of the US-led coalition targeting the militants. This island of steel in the Persian Gulf some 1,090 feet long is home to some 5,000 US Navy airmen, sailors and Marine pilots, carrying some 70 aircraft involved in the fight against the extremists.
You can read the rest of the piece and view the photos via the below link:

Note: The above photo of the USS Theodore Roosevelt was released by the U.S. Navy.
Posted by Paul Davis at 1:35 PM