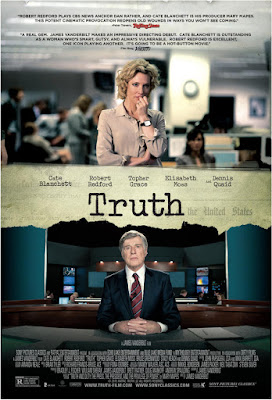 
The classic definition of chutzpah — the guy who murders his parents and then begs for mercy because he’s an orphan — is getting a rewrite with the Oct. 16 release of “Truth,” a movie that insists forged documents are real.

Robert Redford, who makes no effort whatsoever to look or sound like Dan Rather, plays the CBS newsman undone after he presented to the public obviously forged documents about then-President George W. Bush’s Texas Air National Guard service in the early 1970s.

It was September 2004, two months before Bush was to be re-elected in a tight race against Vietnam veteran John Kerry, and Rather’s “60 Minutes” producer Mary Mapes (played by Cate Blanchett with her usual brittle intensity) is desperate for a scoop.

Mapes found a squirrely retired National Guard colonel named Bill Burkett, who gave her photocopied memos that purported to show Bush had been AWOL for a significant portion of his National Guard tenure. The font and spacing on the memos perfectly matched the default settings on a 21st-century Microsoft Word program, Burkett kept changing his story about how he got the documents until he sounded completely insane (and Blanchett is shown making the “cuckoo” sign as she listens to him), two of CBS’s own document experts raised doubts about them — and Burkett was a Bush hater who agreed to hand over the documents in the first place on the condition that Mapes put him in touch with the John Kerry campaign, which he wanted to assist. Mapes and Rather ran with the story anyway, defending it for days — even after other media organizations began casting doubt on them.
You Can read the rest of the piece via the below link: