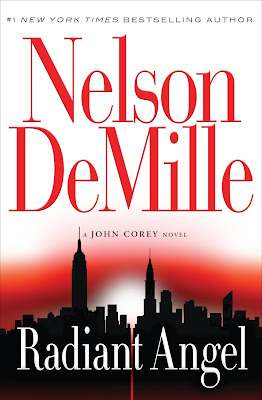 
In Radiant Angel, Nelson DeMille's latest thriller, John Corey targets the resurgent Russians, in a change of pace from the usual Middle Eastern terrorists. Corey, a tough, wisecracking, and irreverent retired NYPD homicide detective turned contract federal agent, has left the New York Anti-Terrorist Task Force for the Diplomatic Surveillance Group. He and his team are assigned to follow a Russian named Vasily Petrov, who is posing as a diplomat. Petrov is a colonel in the SVR, the Foreign Intelligence Service that took over espionage duties from the old KGB.

"Col. Petrov lives in a big high-rise in the upscale Riverside section of the Bronx," narrator Corey tells us. "The building, which we call the 'plex - short for complex - is owned and wholly occupied by the Russians who work at the U.N. and the Russian Consulate, and it is a nest of spies. The 'plex itself, located on a high hill, sprouts more antennas than a garbage can full of cockroaches."


... DeMille, a former U.S. Army officer who saw combat in Vietnam, did extensive research on seaport security for this thriller; a threat to New York Harbor is key to the plot. Radiant Angel is fast-paced and exciting, with amusing commentary and sarcastic asides from Corey. He's a loose cannon. But as DeMille has said in interviews, sometimes, a loose cannon is the only way to win a battle. 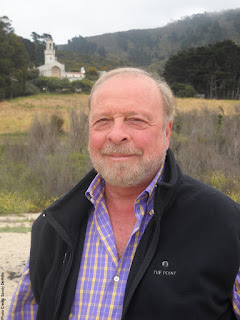 You can read the rest of the review below: 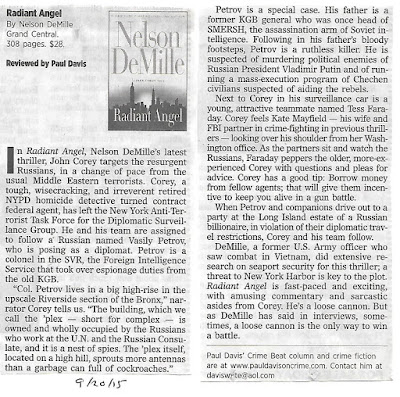 Note: You can click on the above to enlarge.
Posted by Paul Davis at 3:03 PM