Confererate Saboteurs: Building The Hunley And Other Secret Weapons Of The Civil War 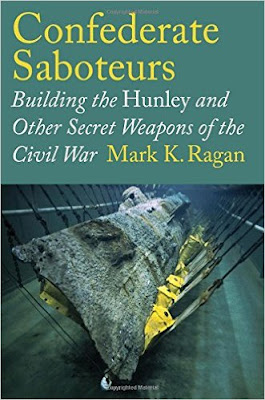 Veteran journalist and author Joseph C. Goulden offers a good review of Mark K. Ragan's Confederate Saboteurs: Building the Hunley and Other Secret Weapons of the Civil War in the Washington Times.


During the frantic last days of the Confederacy, officials involved in intelligence hastily burned records pertaining to Civil War secret service operations, honoring the age-old espionage tenet about the necessity of protecting covert agents. The destruction took on greater urgency when suspicions (unfounded) pointed to a Confederate intelligence role in the murder of President Lincoln.
Alas, the flames also devoured any chance for a comprehensive history of Confederate intelligence activities. Fortunately, history buffs such as Mark Ragan had the tenacity to sort through surviving snippets of records, old newspaper accounts, and stray oral histories to piece together missing parts of a fascinating story: how a group of small-town Texans developed the first submarine to sink an enemy vessel.
The story begins with Union naval raids on and around the port of Galveston, Texas, a key shipping point for the cotton exports that helped keep the Confederacy alive economically. To fend off such attacks, a group of citizens in the adjacent community of Port Lavaca set about developing torpedoes to attack Union ships.
The prime mover was a burly gunsmith (six feet, three inches) named Edgar Singer, who had a knack for mechanics (he was a nephew of Isaac Singer, inventor of the sewing machine). Singer is credited with the notion of using “underwater warfare” as a defensive tool in the war. Using a water-filled barrel in his backyard as a “laboratory,” he began experimenting. Eventually, he and friends developed a contact mine containing up to 50 pounds of black powder, for use both underwater and on land. The typical mine consisted of a watertight metal container, anchored three feet below the water surface, with a spring-loaded detonating device that activated when brushed by the hull of a passing ship. Variations followed.
You can read the rest of the review via the below link: