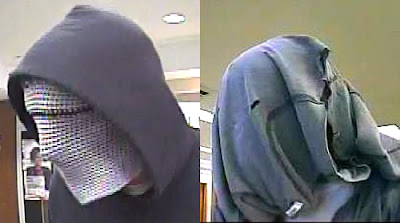 
The masked criminal known as the Cyborg Bandit and, later, the Elephant Man Bandit was robbing Seattle-area banks at an average of more than two per month for an entire year before he was caught—in the act of robbing a bank he had already robbed.
For investigators who routinely work bank robberies, the story of 46-year-old Anthony Hathaway, sentenced last month to nearly nine years in prison, is surprising in some ways but all too familiar in others.
“In this particular case and in general, bank robbery is a crime of last resort,” said Len Carver, a detective with the Seattle Police Department and member of the FBI’s Seattle Safe Streets Task Force. “Occasionally you get a thrill seeker or a truly violent individual, but most people who rob banks are supporting an addiction of some kind—drugs or gambling—and they are desperate.”
Hathaway’s addiction was to prescription painkillers and then to heroin. According to court records, he suffered an injury and became addicted to the opiate Oxycontin. After losing his job, he turned to crime to feed his addiction, and between February 2013 and February 2014, Hathaway admitted to 30 bank robberies. He sometimes hit the same bank multiple times.
“Seattle has had many serial bandits over the years,” Carver said, “but Hathaway was prolific. He might top the list for sheer number of robberies in a one-year period.”
During the holdups, which usually occurred late in the afternoon, Hathaway wore a mask and gloves. In the early crimes, he wore textured metallic fabric over his face and was nicknamed the Cyborg Bandit because the disguise was similar to that of cyborgs in science fiction productions. After that disguise began receiving too much media attention, he covered his head with a shirt and cut out two eye holes. That earned him the nickname the Elephant Man Bandit because of the similarity to a movie character of the same name.
In several robberies, Hathaway threatened tellers, saying he had a weapon, although no weapon was ever displayed. On February 4, 2014, after a robbery in Lynwood, Washington, surveillance video showed what might have been the robber’s getaway vehicle: a light blue minivan with a Seattle Seahawks football decal on the back window and an unusual, after-market exterior mirror.
A bulletin with the vehicle’s description went out to area law enforcement, and an Everett Police Department officer spotted it several days later and notified investigators. “An officer on patrol was being observant,” Carver said. “It was a key moment in the investigation.”
At that point, however, the bank robber’s identity was still unknown. The vehicle was not registered to Hathaway, and several people had access to it. FBI agents began surveillance, and on February 11, 2014 they observed a man drive away in the vehicle.
The driver spent several hours circling a Seattle bank that had been previously robbed. “It seemed clear he was going to rob the bank,” Carver said, “and we had a high confidence that whoever was driving the van and about to rob that bank was going to be good for the other robberies.”
Finally, Hathaway parked and pulled a mask over his face as he entered the bank. FBI agents and task force officers were there to arrest him moments later. Hathaway was identified and later admitted to the 30 robberies. In a plea arrangement concluded last month, he was sentenced to 106 months in prison.
“We are grateful that the Safe Streets Task Force was able to close all these robberies,” Carver said. “And we are pleased that Hathaway is no longer a threat to the community.”
Posted by Paul Davis at 9:54 AM