The Guns Of James Bond 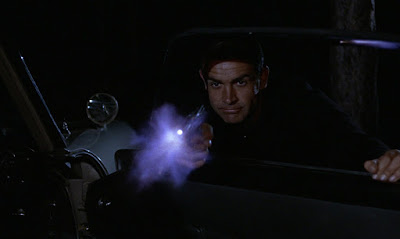 The James Bond website mi6-hq.com offers a look back at a 1964 BBC broadcast which features Sean Connery (seen in the above photo) taking a break from filming Goldfinger to introduce Geoffrey Boothroyd.

Boothroyd was the gun expert who advised Ian Fleming on what guns his fictional character James Bond ought to be using in the thrillers. Fleming based his character Major Boothroyd of "Q" Branch on Geoffrey Boothroyd. The character in the later films was simply called "Q."

You can watch the brief video via the below link: 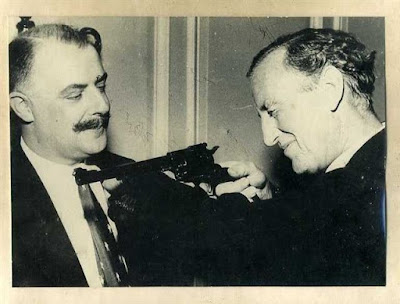 Note: The above photo shows Boothroyd and Ian Fleming.

In defense of the .25 Beretta, the small, light handgun is perfect for concealment and if used close-up and personal, it can be accurate and deadly. Many of the world's assassins in history used a .22 and .25 to murder people for these very reasons.

I own a 25. Beretta, as well as a 9mm Beretta Cougar and a .38 Ruger revolver, and I often carry the small gun in the pockets of my slacks or short pants during the summer months rather than the heavier guns.
Posted by Paul Davis at 7:04 AM