Fighters In The Shadows: A New History Of The French Resistance 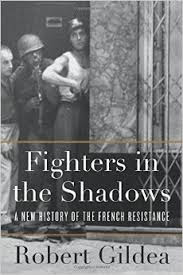 Veteran journalist and author Joseph C. Goulden offers a good review of Robert Gilda's Fighters in the Shadows: A New History of the French Resistance for the Washington Times.


In August 1944, Gen. Charles de Gaulle thrilled a Parisian crowd by declaring, “Paris liberated! Liberated by its own efforts, liberated by its people with the help of the armies of France, with the help of all France, that is France in combat. The one France, the true France, eternalFrance!”
As historian Robert Gildea scathingly documents, seldom has so much nonsense and misinformation been crammed into one oration. But de Gaulle piled lie atop lie with a reason. He laid the foundation for a myth that permeates France to this day: that the country freed itself of German occupation on its own, without the aid of any other power. Doing so “duly allowed France to reclaim its identity as the country of liberty and the rights of man.”
Mr. Gildea, a professor at Oxford University, explores the origins of the myth through a meticulous exploration of the evidence, and his book documents an entirely different France than that extolled by de Gaulle.
You can read the rest of the review via the below link:
http://www.washingtontimes.com/news/2016/feb/14/book-review-fighters-in-the-shadows-a-new-history-/
Posted by Paul Davis at 6:25 AM