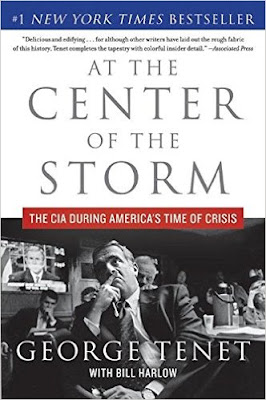 Rowan Scarborough at the Washington Times offers a piece on the CIA and 9/11.


As Republican presidential candidate Donald Trump hammers away at former President George W. Bush for not stopping the September 11 attacks, another factor could be added to the debate: Mr. Bushinherited from Bill Clinton an intelligence community in terrible shape.
This fact comes not from a Republican partisan but from George Tenet, President Clinton’s CIA director, a post that at the time made him the country’s top intelligence officer.
Mr. Tenet wrote in his memoirs, “At the Center of the Storm,” that Mr. Clinton left Mr. Bush with a CIA that was in “Chapter 11.” The eavesdropping National Security Agency was “crumbling” and “going deaf,” he said.
It is one explanation for why the intelligence community failed to discover and stop the September 11 plot.
Mr. Clinton is an integral part of Hillary Clinton’s Democratic presidential campaign. The record shows that, as commander in chief, he shrunk the CIA at the very time al Qaeda was expanding.
On his watch, the Osama bin Laden terror group declared war on the U.S. and carried out the first World Trade Center attack, as well as the bombings of a destroyer and two American embassies in Africa.
You can read the rest of the piece via the below link:

http://www.washingtontimes.com/news/2016/feb/15/george-w-bush-inherited-crumbling-intelligence-com/
Posted by Paul Davis at 5:49 AM